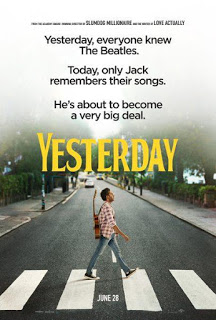 Directed by Danny Boyle
Written by Richard Curtis (based on story by Jack Barth)
Starring Himesh Patel, Lily James and Ed Sheeran
‘A Joyous Jukebox Musical’
Imagine living in a world without the Beatles. Arguably the greatest rock band of all-time, the Beatles forever changed the music industry. It is almost impossible to imagine a world in which their timeless music does not exist. Let’s ponder for a moment, though, what would happen if the Beatles did not exist. After a global blackout occurs, you wake up to find that nobody has heard of the Beatles. As a struggling singer, you happen to be the only person on earth that remembers the Beatles and their music. Would you steal their songs and pass them off as your own to achieve fame in the industry? Or would you leave their music alone to honor the band’s legacy?
This is the clever concept of Danny Boyle’s latest film “Yesterday”. A joyous jukebox musical, it asks viewers to imagine a world in which the Beatles do not exist. With his latest feature, director Danny Boyle has crafted a glowing tribute to the Beatles and their timeless music. Using the Fab Four’s famous songs, Boyle has created a love letter to the greatest rock band of all-time. Packed with toe-tapping musical numbers, plenty of laughs and terrific performances from the cast, the film offers irresistible summer entertainment. Although “Yesterday” is undeniably entertaining, it is not a film without flaws. At two hours, it is slightly long and suffers from a lengthy running time. That being said, it offers fun popcorn entertainment that fans of the Beatles won’t be able to resist.

Set in modern-day Britain, “Yesterday” follows the life of a musician that struggles to achieve fame in the industry. Himesh Patel stars in the lead role as Jack Malik, a singer/song-writer whose dreams of fame are rapidly fading. Despite fierce support from his best friend Ellie (Lily James), Jack has lost hope of becoming a superstar. After the world experiences a global blackout, Jack wakes up to find that he is the only one that remembers the Beatles and their music. Jack performs the Beatles’ songs to catapult his career to stardom, but he soon discovers that his decision comes with a cost.

It’s a joyous celebration of the Beatles and their music that is expertly crafted by director Danny Boyle. As a filmmaker, Boyle is known for making inspirational films about ordinary people that overcome impossible odds. With “Yesterday”, however, he takes his first step into musical territory. It’s the director’s first stab at staging a musical focused on the Beatles. It is not easy to create a musical based on a beloved band, but Boyle pulls it off effortlessly. Through exhilarating musical sequences, Boyle draws viewers into the world of a musician obsessed with the Beatles. It is hard to not marvel at the musical sequences, which are well-executed and arguably the main highlight of the movie. From Jack’s moving rendition of “Yesterday” to his rooftop concert in which he pleads for “Help”, the film is packed with musical sequences that are sure to satisfy Beatles fans. Each song is carefully chosen and serves a purpose in enhancing the story. “Yesterday” is worth seeing on the big-screen for its musical sequences alone.

If the Beatles’ music does not attract you to the theatre, though, there are still plenty of other reasons to see “Yesterday” on the big-screen. Even if you’re not a fan of the Beatles, it is hard to not be swept away by the story. Richard Curtis’ screenplay is extremely well-written and offers an insightful look at the modern music industry. The script is filled with colourful characters, witty dialogue and comical situations. Curtis’ greatest strength as a screenwriter is his ability to create hilarious situations that poke fun at a world without the Beatles. For instance, the funniest scene in the film is when Jack plays “Let it Be” for the first time in front of his family. Jack keeps getting interrupted by his parents and never ends up finishing the song. It’s a scene that works tremendously due to the combination of sharp dialogue and funny expressions of the actors. Using an engaging screenplay, Curtis keeps viewers engrossed in a world without the Beatles.

It is hard to not admire the amazing performances from the cast. Every actor gets the chance to shine and leave a lasting impression, but the film is mainly a showcase for the leading star.

Himesh Patel delivers a star-making performance as Jack Malik. In his first ever leading role, Patel proves to be a bonafide movie-star with a knack for belting out Beatles songs. With heartfelt expressions, he captures the struggles of a musician that feels guilty for stealing the Beatles’ music. It’s a demanding role that requires the actor to sing a massive catalogue of Beatles songs, but he proves to be up to the challenge. For a first-time actor, Patel performs the songs with surprising confidence and ease. Not only does he play a musician convincingly, but he manages to do full justice to the best songs ever written. While Patel isn’t well-known in the industry, this powerful performance will surely gain him the recognition he deserves.

The supporting cast is excellent and seems to be having a blast of fun. Lily James is sweet and charming as Jack’s love interest Ellie. Ed Sheeran is fantastic and steals nearly every scene he is in as an exaggerated version of himself. And finally, it is hard to not mention Joel Fry. As Jack’s exuberant friend, he brings hilarious comical relief and persona to the film.

Although “Yesterday” offers exhilarating entertainment, ultimately it is not a film without flaws. At nearly two hours, it is slightly long and suffers from a lengthy running time. With an eclectic selection of Beatles songs, Danny Boyle keeps the film moving at an engaging pace during the first hour. However, once the film enters its final act is starts to lose momentum and test the viewer’s patience. Moreover, there’s a surprise cameo from a famous musician that comes across as misjudged. Boyle’s decision to bring back a beloved musician from the dead is bold and unexpected. That being said, it doesn’t entirely work. Some viewers will be moved by this scene, while others will scoff at its implausibility. Due to this controversial scene, “Yesterday” is one of those films that will not appeal to everyone.