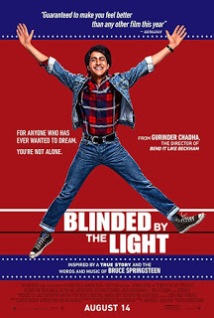 Written and Directed by Gurinder Chada
Co-written by Paul Mayeda Berges and Sarfraz Manzoor
Starring Viveik Kalra, Kulvinder Ghir and Hayley Atwell
‘A Marvelous Musical’
When it comes to the greatest rock musicians of all-time, Bruce Springsteen is definitely one of them. Ever since he rose to fame in the 1970’s, Springsteen has become one of the most beloved singers in the world. With their poetic lyrics, catchy tunes and inspiring message, his songs have touched fans around the world. However, perhaps nobody has been more inspired by Springsteen’s music than Sarfraz Manzoor. During the 1980’s, Manzoor grew up listening to Bruce Springsteen to escape his troubled adolescence. As a Pakistani teenager that grew up in England, Manzoor was bullied by his peers and mistreated by his parents. Nevertheless, Springsteen’s music helped him achieve his dream of becoming a journalist.
Gurinder Chadha’s latest film “Blinded by the Light” brings Manzoor’s real-life story and love of Bruce Springsteen to the big-screen. A marvelous musical, it focuses on a British Pakistani teenager that is inspired by Springsteen’s songs. With her latest feature, Gurinder Chadha has created a love letter to Bruce Springsteen and his timeless music. Using The Boss’ famous songs, Chadha crafts a compelling coming-of-age story focused on a British Pakistani teenager. Packed with magnificent musical sequences, heartfelt drama and powerful performances from the cast, it offers irresistible entertainment. Although “Blinded by the Light” is undeniably entertaining, it is not a film without flaws. At two hours, it is slightly long and suffers from a lengthy running-time. That being said, it offers heartwarming entertainment that fans of Bruce Springsteen won’t be able to resist.
Set in 1987 Britain, “Blinded by the Light” follows a teenager that struggles to live life on his own terms. Viveik Kalra stars in the lead role as Javed Khan, a British Pakistani teenager whose dream is to become a writer. Javed struggles to achieve his dream due to his overbearing parents and the constant racism he faces in his hometown. However, Javed’s life forever changes when a classmate introduces him to Bruce Springsteen’s music. As he listens to The Boss, Javed is given the inspiration to find his own voice and follow his dreams much against the wishes of his parents.

It’s an uplifting coming-of-age story set to the music of Bruce Springsteen that is expertly crafted by director Gurinder Chadha. As a filmmaker, Chadha is known for her inspirational dramas about Indians and their struggles to immigrate to England. With “Blinded by the Light”, however, Chadha takes her first step into musical territory. It is not easy to create a musical about a beloved singer, but Chadha pulls it off effortlessly. Using exhilarating musical sequences, she draws viewers into the world of a teenager that is obsessed with Bruce Springsteen. It is hard to not admire the musical sequences, which are brilliantly executed and arguably the highlight of the movie. From Javed’s dramatic discovery of “The Promised Land” to his joyous rendition of “Born to Run”, the film is packed with memorable musical sequences that are sure to satisfy Springsteen fans. Each song is seamlessly integrated into the narrative and conveys the emotions of the characters. “Blinded by the Light” is worth watching on the big-screen for its musical sequences alone.

If Bruce Springsteen’s music does not attract you to the theater, though, there are still plenty of other reasons to see “Blinded by the Light” on the big-screen. Even if you’re not a fan of The Boss, it is hard to not be swept away by the story. Gurinder Chadha’s screenplay is extremely well-written and offers great insights into British Pakistani culture. The script is filled with fascinating characters, witty dialogue and realistic situations. Chadha’s greatest strength as a screenwriter is her ability to create an authentic portrait of a British Pakistani family. It is often easy for screenwriters to resort to stereotypes when creating Pakistani characters. Thankfully, though, Chadha avoids these pitfalls with “Blinded by the Light”. Instead, she creates characters that are fully realized and larger-than-life. Besides, she captures the dynamics of a Pakistani family in an authentic way. Using an engaging screenplay, Chadha keeps viewers engrossed in the lives of a British Pakistani family.

In terms of acting, the entire cast is at the top of its game. Every actor gets the chance to shine and leave a lasting impression, but the most notable standout is the leading star.

Viveik Kalra delivers a dazzling debut performance as Javed Khan. In his first ever leading role, Kalra proves to be a genuine movie-star with an uncanny talent for singing Springsteen songs. Through soulful expressions, he captures the persona of a British Pakistani teenager that is obsessed with Bruce Springsteen. It’s a challenging role that requires the actor to sing, dance and portray a troubled adolescent, but he pulls it off seamlessly. For a first-time actor, Kalra performs Springsteen’s songs with surprising confidence and ease. Moreover, he conveys the angst of an adolescent that is struggling to find his identity in the world. While Kalra isn’t well-known in the industry, this remarkable performance will surely gain him recognition and pave the way for a prestigious career.

The supporting cast is superb and also worthy of recognition. Kulvinder Ghir is excellent and brings genuine emotion to the role of Javed’s strict father. Nell Williams is sweet and charming in the role of Javed’s girlfriend Eliza. And finally, it is hard to not mention Aaron Phagura. As Javed’s best friend Roops, he brings hilarious comical relief and persona to the film.

Although “Blinded by the Light” offers marvelous musical entertainment, ultimately it is not a film without flaws. At nearly two hours, it is slightly long and suffers from a lengthy running-time. Using a spectacular selection of Springsteen tunes, Gurinder Chada keeps the film moving at an engaging pace during the first hour. However, once the film enters its final act it starts to lose steam and test the viewer’s patience. Moreover, Chadha falls prey to genre cliches and ends the film on a predictable note. Chada’s decision to finish the film with an inspirational speech is undeniably moving and uplifting. However, the ending doesn’t entirely work. Instead of bringing the story to a satisfying conclusion, it only reduces viewers to tears. Due to its overly sentimental ending, “Blinded by the Light” is one of those films that will not appeal to everyone.

Nevertheless, fans of Bruce Springsteen will definitely enjoy “Blinded by the Light” and so will movie-goers seeking joyous entertainment this summer season. It is one of those rare, once-in-a-lifetime movies that will inspire you to pursue your dreams no matter how unattainable they may seem.