Directed by Autumn de Wilde
Written by Eleanor Catton (based on the book by Jane Austen)
Starring Anya Taylor-Joy, Johnny Flynn and Bill Nighy
‘An Astonishing Austen Adaptation’
When it comes to the most beloved authors of the 19th Century, nobody beats Jane Austen. Ever since she rose to prominence in the 1800’s, Austen has proven to be one of the most renowned female novelists in the world. With their timeless themes of womanhood, marriage dependence and economic security, her books are held in the highest regard today. Perhaps, Austen’s most well-known literary work is “Emma”. It is one of those books that is so admired that it has been adapted to the big-screen three times. Each adaptation has offered a fresh perspective and captured the essence of the source material.
Now, Autumn de Wilde brings the beloved tale of womanhood to the big-screen in her latest film “Emma”. The fourth rendition is a funny, witty and heartwarming film that offers a unique interpretation of the source material. With her directorial debut, Wilde has crafted an astonishing adaptation of the literary classic. Packed with exquisite production values, smart storytelling and powerful performances, it is a highly effective Jane Austen adaptation. Although “Emma” is undeniably entertaining, ultimately it is not a flawless film. It is slightly long, and builds to the formulaic conclusion that we’ve come to expect from films in the genre. Nonetheless, it offers old-fashioned entertainment that fans of Jane Austen won’t be able to resist.
Set in 19th Century England, “Emma” tells the story of an aristocratic woman that meddles in the love affairs of her friends. Anya Taylor-Joy stars in the title role as Emma Woodhouse, a skilled matchmaker that uses clever schemes to find suitable partners for her acquaintances. Emma is determined to find the perfect partner for her friend Harriet (Mia Goth). However, she does not intend to get married herself. As Emma struggles to find the ideal suitor for Harriet, she begins to yearn for a romantic relationship of her own.
First-time filmmaker Autumn de Wilde is a newbie to Jane Austen adaptations. Wilde is a fashion photographer that is best known for her artistic work on music videos. “Emma”, however, marks her first feature film and foray into the world of Jane Austen. It is the filmmaker’s first attempt to bring the beloved literature of Jane Austen to the big-screen, but she pulls it off seamlessly. Using captivating cinematography, Wilde draws viewers into the life of an aristocratic woman in the 19th Century. From intimate close-ups to breathtaking establishing shots, the cinematography immerses viewers into the historical setting. Working alongside cinematographer Christopher Blauvelt, Wilde creates a sumptuous film in which each frame is a feast for the eyes. Wilde excels at immersing viewers into the world of a wealthy socialite in the 19th Century, and her debut feature is worth watching on the big-screen for this reason alone.
If Jane Austen’s literature does not attract you to the theater, though, there are still plenty of other reasons to see “Emma”. The film is extremely well-made, and features the most impressive production values that you’ll ever see in a literary adaptation. The sets, costumes and musical score are all carefully chosen, combining to create an unforgettable movie-going experience. Wilde excels at designing the costumes for her film. Assisted by costume-designer Alexander Byrne, Wilde creates lavish costumes that bring out the personalities of characters. For instance, Emma’s wide range of elaborate dresses showcase her character development throughout the movie. Moreover, the musical score is also worth praising. Isobel Waller-Bridge and David Schweitzer’s classical score is highly effective. It gives the film a joyous and upbeat atmosphere that is missing from previous adaptations. Through astonishing production values, Wilde keeps viewers engrossed in the life of a mischievous matchmaker.
Another commendable aspect of “Emma” that contributes to its success is the screenplay. Eleanor Catton’s adapted screenplay is superb, and arguably the main highlight of the movie. Filled with fascinating characters, witty dialogue and clever twists, the script elevates the movie to another level. Catton’s greatest strength as a screenwriter is her willingness to take risks with the source material. When adapting a classic book to the big-screen, screenwriters tend to follow a safe formula and stick close to the source material. This often leaves room for no surprises and detracts from the quality of literary adaptations. Thankfully, though, that is definitely not the case with “Emma”. Using clever narrative twists, Catton crafts a film that is constantly surprising. Plot twists are risky devices to employ in literary adaptations, but they work tremendously in this movie. Through an engaging screenplay, Catton keeps viewers invested in the whimsical world of Jane Austen.
In terms of acting, the entire ensemble is at the top of its game. Every star gets the chance to shine, but the film is mainly a showcase for its titular lead. 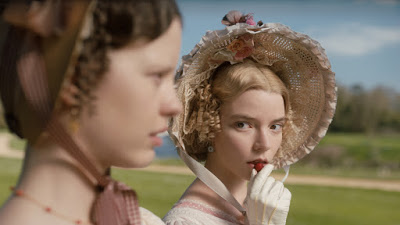 Anya Taylor-Joy delivers her finest performance to date as Emma Woodhouse. Taylor-Joy is best known for playing helpless heroines in horror movies. With “Emma”, however, she takes on the most complex role of her career thus far. It is not easy to portray a mischievous matchmaker in the 19th Century. It’s a tricky role that requires the actress to strike a fine balance between being sympathetic and detestable. However, Taylor-Joy pulls it off effortlessly. With alluring expressions, she conveys the passion, desires and jealousy of a socialite that yearns to be loved. It’s a terrific performance from one of the most talented actresses working today.
The supporting cast is spectacular and also worthy of recognition. Johnny Flynn is fantastic and brings simmering sexual tension to the movie as Emma’s love interest Mr. Knightley. Miranda Hart is magnificent and imbues shades of humanity into the ridiculed Miss Bates. And finally, it is hard to not mention Bill Nighy. As Mr. Woodhouse, the legendary actor brings hilarious comical relief and persona to the movie.
Although “Emma” is undeniably an astonishing literary adaptation, ultimately it is not a flawless film. At over two hours, it is slightly long and suffers from a lengthy running-time. Aided by Isobel Waller-Bridge’s lively score, Autumn de Wilde keeps the film moving at an engaging pace during the first hour. However, once the film enters its climax, it starts to lose steam and test the viewer’s patience. Moreover, the film suffers from a formulaic ending. After building romantic tension for two hours, Wilde chooses to end the movie on a predictable note. It’s a melodramatic finale that isn’t entirely effective at bringing the story to a satisfying closure. Jane Austen adaptations thrive based on the power of their endings, and this is where “Emma” falls short of expectations.
Nevertheless, fans of Jane Austen will definitely enjoy “Emma” and so will movie-goers seeking old-fashioned entertainment. An amazing adaptation of the classic novel, it proves that Jane Austen’s literature is worthy of cinematic treatment. At a time when modern audiences seem to have forgotten Jane Austen, it’s a stirring reminder that her timeless stories are worth retelling on the big-screen.