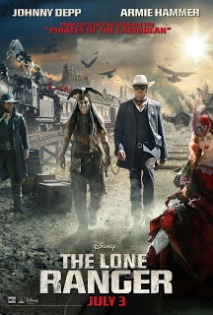 Don’t you hate it when a movie is unnecessarily lengthy? When it drags on for much longer than it needs to, yet for no understandable reason at all? Well quite unsurprisingly, half way through these kinds of films, a feeling of restlessness kicks in. What at first sight seemed like a fun time at the movies, eventually turns into a painful session of tolerating a particular story. In this case, its hard to avoid glancing at your watch every five minutes or even shaking your head in disappointment.

Then comes that feeling of joy and excitement when the film finally ends. A sense of relief, that you’re finally getting away from bland characters and a story that you never cared about in the first place.

This, in a nutshell, is what the latest western “The Lone Ranger” offers. Entertaining only to a certain point, this messy, overtly ambitious film defies logic and sense only to come across as highly mindless entertainment. Wait…of course one doesn’t expect something more than satisfying pop-corn thrills, especially from a summer blockbuster, but over the last decade filmmakers have been able to inject smartness and uniqueness even into this genre. They have proved that these movies can be more than just entertaining. “The Lone Ranger”, however, is strictly entertainment due to it’s shallow writing, misguided direction and a cast that appears to be mostly wasted. Filmmaker Gore Verbinski takes a brave leap of faith by extending the movie’s running time to nearly 2 and 1/2 hours. Yet, his ill-conceived approach which aims to make a huge spectacle out of a simplistic story, doesn’t work well at all. In fact, it comes across as quite ridiculous, creating a film that entertains like a roller-coaster ride up until that one point where the viewer cannot take anymore nonsensicality.

Following Johnny Depp as Tonto, and Armie Hammer as John Reid/ The Lone Ranger, this movie tells the story of their partnership to bring justice to a town filled with criminals.

How idiotic this film is immediately becomes noticeable as it is quite evident in the opening scene. In the beginning of the movie, a young kid starts talking to a Native American in what seems like a museum. A weak way to begin a movie, may I say?  But here’s the twist: the Native American is supposed to be a mere statue. Property of the museum. He keeps talking to the boy, yet despite there being many people in the museum, nobody seems to notice this. Are audiences really that unaware to not notice these gaping holes? It appears to be what the director and screenwriters believe. Anyhow, they are wrong. Completely. And, from here on in, damage has already been done to their western “The Lone Ranger”.

Admittedly, this blockbuster has fun written all over it. Featuring grand, impressively staged action sequences, a familiar but effective soundtrack and few moments of charming chemistry between it’s two leads, the movie represents serviceable entertainment. Yet its the kind of entertainment that lacks brains, instead taking the cheapest, most superfluous routes possible to try to please the viewer. In an age where blockbusters such as “Iron Man 3” and “Stark Trek Into Darkness” spark out-of-the-ordinary and unpredictable material, “The Lone Ranger” stands at the bottom of the pits.

Who ever thought that Gore Verbinski, the director of the first three memorable “Pirates of the Caribbean” films as well as 2011’s fantastic Rango, could do any wrong? Considering how comfortable he seemed to be with the genre, certainly not me. But, with this latest outing, he falls into the disgraceful trap of cash-grabbing. “The Lone Ranger” is nothing but a money-making scheme with a ridiculous amount of talented stars involved, yet none used to their greatest potential. Worse, out of unneeded ambition, Verbinski extends a running time nearly equivalent to that of “The Dark Knight”. The results…let’s just say that they are not too appealing.

This movie didn’t need to be created in such a spectacular manner. Its understandable when epic conclusions to franchises, as well as time-spanning films are longer than expected. Yet this western is neither of those, and has a story that doesn’t deserve such a high standard of treatment. Although this kind of approach worked well for the “The Pirates of the Caribbean” movies, they had intriguing characters and a much more focused plot. In other words, their quality merited a heavy handed approach. “The Lone Ranger” just doesn’t. Director Gore Verbinski gets carried away with his usual ways of producing a movie, and the film suffers tremendously because of this.

Any talent that the actors of the cast possess is flushed down the drain. Some such as Depp and Hammer are able to tune in passable performances.

As Tonto, Johnny Depp plays the sort of character that he normally impersonates on a regular basis: weird, mysterious and comical. Being a nuanced actor, he does a solid job in the role yet one can’t shake off a strong feeling of familiarity. We’ve seen this performance before; it’s similar to the actor’s portrayal of Captain Jack Sparrow in “The Pirates of the Caribbean” franchise. Take away Jack Sparrow’s drunk manner, plus his tendency to smile all the time, and you’ve got Depp’s Tonto. Is it just me, or is this showing a lack of versatility? Surely, Depp has accomplished a wide variety of distinct roles but here the performer appears to be showing signs of laziness and unoriginality. From his typical expressions to weird actions, the actor doesn’t step out of his comfort zone in any way.

Armie Hammer, on the other hand, just lacks charisma and leading man qualities. Despite having some charming chemistry with Depp, he appears to be slightly miscast in the role of John Reid. Its the kind of character that requires a ton of charisma as well as a charming persona; not just good looks. Hammer shines in his scenes with Depp as the two work quite well off each other’s performances, but otherwise he seems out-of-place. Given his excellent performance in the “The Social Network”, perhaps a solemn supporting role would have been more suitable for him. And perhaps, reasonably experienced stars such as Robert Downey Jr. or even Matt Damon would have been spot-on choices for this specific character.

When you throw in an unnecessary/irritating subplot that concludes in the lousiest manner ever, a rather silly twist that doesn’t add anything creative to the film, and the fact that the filmmakers could have cut at least an hour of material from the running time, you’ve got “The Lone Ranger”. Enjoy it’s thrills while they last, which is not for long…