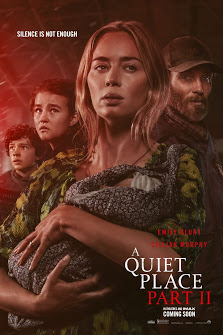 Written and Directed by John Krasinski
Starring Emily Blunt, Millicent Simmonds and Cillian Murphy
‘A Spectacular Sequel’
The hushed-up stories of deaf communities are rarely ever heard in horror movies. Over this recent decade, Hollywood has developed a terrible reputation for casting non-disabled actors in hearing-impaired roles. This has put deaf communities at a disadvantage by denying them fair opportunities. For instance, Netflix’s horror film “Hush” met uproar by casting an able-bodied actress in a deaf role. In all fairness, one could suggest that actors must be selected based on their talents rather than bodies. However, in 2018, John Krasinski proved otherwise by scouting an actual deaf actress in “A Quiet Place”. Not only did the film loudly merit deaf talent, but it opened room for a sequel. Could the sequel scare movie-goers into silence again through its deaf heroine?
Horror sequels seldom surpass spine-chilling scares of their predecessors, but “A Quiet Place Part II” comes deafeningly close. An ambitious, heartfelt and suspenseful sequel, it quietly carves place for hearing-impaired heroines in horror movies. With his long-awaited follow-up, John Krasinski masterfully utilizes sound design to recreate a hearing-impaired heroine’s experiences. Packed with immersive sound-work, subtle storytelling and phenomenal performances, it’s an outstanding sequel. Although “A Quiet Place Part II” is undeniably unforgettable, ultimately it isn’t a flawless film. It’s rushed, and undermined by an anti-climactic conclusion that lacks resolution. Nonetheless, it offers exciting entertainment that will satisfy fans of the original.
Set during a post-apocalyptic dystopia, “A Quiet Place Part II” resumes the Abbott family’s adventures to remain silent to elude hearing-sensitive monsters. Emily Blunt recommences the role of Evelyn Abbott, a widowed matriarch coping with tragic loss. Accompanied by her fearless children, Evelyn ventures into a journey through deadly terrain. However, what begins as a quiet journey becomes frightening when the family encounters survivors. As Evelyn develops alliances, she strives to exterminate aliens.
Writer/director John Krasinski is well-versed in horror movies. Ever since he reached worldwide recognition with “A Quiet Place” in 2018, Krasinski has transformed into an experienced horror filmmaker. His sophomore feature “A Quiet Place” demonstrated his strengths for generating spine-shivering terrors through silence. With “A Quiet Place Part II”, however, Krasinski has crafted his first deafcentric movie. It’s the filmmaker’s first attempt to capture experiences of marginalized communities in mainstream horror, but he pulls it off tremendously. Using spellbinding cinematography, Krasinski draws viewers into a family’s endeavors to survive without noise. Working alongside cinematographer Polly Morgan, Krasinski deftly uses long takes to craft tension. Inspired by Steven Spielberg’s “Jaws”, long takes evoke fear of noise like sharks that keep people from entering waters. Krasinski excels at creating soundless suspense, and his latest feature is worth watching in theaters for this reason alone.
If stories of dystopian survival do not attract your attention, though, there are plenty of other reasons to see “A Quiet Place Part II”. Improving upon the predecessor, Krasinski once again excels at utilizing sound design to emulate the hearing loss experience. Assisted by sound editors Ethan Van der Ryn & Erik Aadahl, Krasinski adeptly uses sound design to differentiate between a deaf adolescent’s perspective and reality. For instance, sound design is integrated especially well to mimic hearing loss in the alien-attack scene. During this memorable scene, it’s hard to not gape in terror at the sight of a hard-of-hearing girl struggling to evade monsters with hyper-sensitive hearing. Sound plays a pivotal role in sustaining tension by shifting back and forth between pindrop silence and deafening noise. Using this sound-work, Krasinski imitates deafness in a gritty style evocative of 2020’s “Sound of Metal”. Moreover, Michael P. Shawver’s editing merits praise. Cross-cutting is deftly used to build suspense. Through dazzling production values, Krasinski keeps viewers wound-up.
Another astonishing aspect of “A Quiet Place Part II” is the screenplay. Krasinski’s greatest strength as a screenwriter is his aptitude for crafting a compassionate portrait of deaf communities through sign-language. In Hollywood, most horror films hinge upon stereotypes to portray deaf communities and often criticize their lifestyles. Deaf characters are usually depicted as vulnerable victims rather than individuals with agency. Thankfully, though, that is certainly not the case with “A Quiet Place Part II”. Krasinski wisely avoids stigmatizing disabilities. Instead, he expertly utilizes minimal dialogue to create empathy for the community. Like its predecessor, this film features scenes of silence in which the deaf daughter Regan communicates via sign-language. Throughout the film, Regan’s sign-language shows her transformation from a frightened teenager into a courageous heroine. Using sign-language, Krasinski crafts a compelling deaf heroine whom audiences can easily empathize with. It’s an empowering portrayal of deafness that’s become all-too-rare to witness in horror movies. Through an unconventional screenplay, Krasinski keeps viewers engrossed in a hearing-impaired girl’s journey.
One can’t overlook outstanding performances.

Millicent Simmonds delivers a dazzling performance as Regan Abbott. Following her breakthrough turn in 2018’s “A Quiet Place”, Simmonds has proven to be an extraordinary disabled actress with an aptitude for playing deaf adolescents. With “A Quiet Place Part II”, however, Simmonds takes on her most central role to date. It’s not easy to get into the mindset of a hearing-impaired adolescent that hoodwinks sound-hunting creatures. However, Simmonds pulls it off seamlessly. With mesmerizing expressions, she conveys the determination, perseverance and resourcefulness of an adolescent that uses her disability as a weapon to extinguish creatures. It’s an inspirational performance that showcases strengths of disabled actresses.
Emily Blunt is excellent in the role of a compassionate mother that puts her own life on the line to protect her children. While most horror movies depict women as damsels-in-distress, Blunt brilliantly subverts these tropes. As Evelyn, she continues to demonstrate her strengths as an actress for playing headstrong heroines through subtle nonverbal sign-language. Whether she’s quietly lamenting the loss of her husband or caring towards her son’s bear-trap injury, Blunt deftly uses nonverbal gestures to convey Evelyn’s protective nature over her children. It’s a superb performance from Britain’s finest actress.
Despite its phenomenal performances, however, it’s unfortunate that “A Quiet Place Part II” can’t quite summon the silently creepy scares of its superior predecessor. If there’s a small drawback to the movie, it suffers from a frenetic length. At 90 minutes, the film moves at a fast pace that leaves no room for world-building. Arguably, extending the running-time would have made for a more satisfying sequel by leaving time for world-building. Moreover, the film is undermined by an abrupt ending. Krasinski’s decision to end the film with a cliff-hanger is bold and inventive, but it doesn’t work. Instead of offering satisfying closure, it’s a rushed finale that seems intent solely to setup a third film. Whereas this ending fit in “A Quiet Place”, it begs questions in this film. Hence, “A Quiet Place Part II” falls short of expectations.
Nevertheless, fans of horror movies will definitely enjoy “A Quiet Place Part II” and so will movie-goers seeking frightening entertainment. A silently spine-shivering sensation, it breaks barriers for deaf communities in horror movies. If deaf actors can single-handedly defeat an apocalypse, it’s high time that Hollywood gave them loud place by not silencing their hidden talents any longer.
4/5 stars