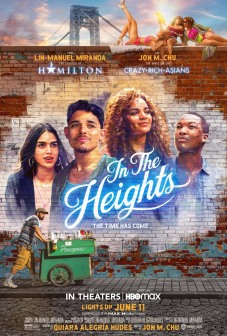 Directed by John M. Chu
Written by Quiara Alegria Hudes
Starring Anthony Ramos, Corey Hawkins and Melissa Barrera
‘A Marvelous Musical’
It isn’t easy to adapt a theatrical Broadway musical on the big-screen. In order to craft a successful stage adaptation, filmmakers must pay careful attention to the storytelling, characters, and dance numbers of the original play. However, at the same time, it’s important to keep in mind differences between the two art-forms. This often requires making risky technical choices about whether stage material should be condensed or completely cut from movies. Simply put, what works in theater isn’t guaranteed to result in movie-magic. As 2019’s catastrophic “Cats” implied, musicals with strange tails leave movie-goers in mew-sery. How, then, could a Broadway production possibly attract audiences to Cinemas during the pandemic today?
The heightened appeal behind watching people sing and dance without social distancing is dizzyingly depicted in John M. Chu’s latest film “In the Heights”. An energetic, inspirational and nostalgic musical, it seamlessly soars from stage to screen. With his ninth feature, writer/director John M. Chu reimagines Lin-Manuel Miranda’s Broadway phenomenon on the big-screen with flying colors. Packed with toe-tapping dance sequences, empathetic storytelling and magnificent performances, it’s one of 2021’s best movies. Although “In the Heights” is undeniably exhilarating, ultimately it isn’t a flawless film. Its overlong running-time tests viewers’ patience. Nonetheless, it offers heartwarming entertainment that will satisfy fans of musicals.
Set in Washington Heights, “In the Heights” follows intertwined Latin-American immigrants that pursue prosperity in their tightknit neighborhood. Anthony Ramos stars in the leading role as Usnavi, an impoverished bodega owner that dreams of ditching his low-paid job. Following an unexpected lottery win, Usnavi sees an opportunity to leave his neighborhood. However, when he falls for childhood friend Nina (Melissa Barrera) Usnavi re-evaluates his goals. As Usnavi bonds with residents, he questions where he truly belongs.
Writer/director John M. Chu is knowledgeable about musicals. Ever since he stepped in the mainstream with “Step Up 2: The Streets” in 2008, Chu has transformed into an excellent Asian-American filmmaker. His directorial debut “Step Up 2: The Streets” showcased his aptitude for staging elaborate street dance sequences. With “In the Heights”, however, Chu has created his first stage adaptation. It’s the filmmaker’s first attempt to adapt a beloved Broadway musical on the big-screen, but he pulls it off masterfully. Using spellbinding cinematography, Chu immerses viewers into lifestyles of Latin-American immigrants in Washington Heights. Working alongside cinematographer Alice Brooks, Chu meticulously uses real-life locales to evoke the play’s neighborhood. Inspired by “Do the Right Thing”, the real-life locales lend a sense of authenticity to the racial neighborhood. Chu adapts the musical into movie-magic, and his latest film begs to be seen in theaters for this reason alone.
If renowned stage productions do not attract your attention, though, there are still plenty of other reasons to see “In the Heights”. Chu excels at replicating musical sequences from the theatrical play using magical realism. Accompanied by choreographer Christopher Scott, Chu successfully uses magical realism to express emotions of characters in musical numbers. For example, magical realism is expertly used to evoke love in the “When the Sun Goes Down” song. In this wondrous scene, a besotted couple defies gravity by waltzing across windows of an apartment. It’s hard to not gape in awe as the camera weightlessly glides with lovers in a fantastical style reminiscent of “La La Land”. Using this magical realism, Chu conveys soaring emotions of how it feels to be in love. Chu crafts mesmerizing musical numbers that are impossible to execute on stage. Moreover, Lin-Manuel Miranda’s score also deserves praise. Each song is masterfully incorporated into the story and leaves viewers humming its tunes. Through marvelous production values, Chu builds a whimsical world.
Another remarkable aspect of “In the Heights” is the screenplay. Hudes’ greatest strength as a screenwriter is her ability to create a compassionate portrait of an immigrant community using framing devices. In Hollywood, most movies about marginalized Latin-American communities are driven by stereotypes and often criticize their lifestyles. This often leaves no room for emotional investment and builds misconceptions of Latin communities. Thankfully, though, that is definitely not the problem with “In the Heights”. Hudes sensibly avoids misrepresenting Latin-American immigrants. Instead, she effectively employs a framing technique to build empathy for the under-represented community. Throughout the movie, Usnavi recounts his life experiences to his children in fairy-tale fashion. Usnavi’s reflections offer profound insights into struggles experienced by Latin immigrants in America. Through this framing device, Hudes creates a compelling Latin-American character whom viewers can easily sympathize with. In an industry that normally misrepresents Hispanics, it marks positive strides towards representation. Using an unconventional screenplay, Hudes keeps viewers absorbed in Latin-American culture.

It’s hard to not praise phenomenal performances.
Anthony Ramos delivers a star-making performance as Usnavi. Following his breakout turn in Broadway’s “Hamilton”, Ramos has become an outstanding theater actor with flair for performing on stage. With “In the Heights”, however, he takes on his most demanding role to date. It’s not easy for theater stars to seamlessly transition from stage to screen. However, Ramos pulls it off effortlessly. With mesmerizing expressions, he embodies aspirations, disillusionment and resilience of a Puerto-Rican immigrant that searches for success in his tightknit community. Not only does Ramos do justice to iconic songs, but he emerges as a gifted dancer. It’s a show-stopping performance from one of Broadway’s thespians.
The supporting cast is award-worthy and crafts strong camaraderie. Melissa Barrera is brilliant, pouring simmering sexual tensions into the movie as Usnavi’s swoon worthy lover Vanessa. Corey Hawkins is sensational and sweeps away your heart as Usnavi’s confidant Benny. And finally, it’s hard to forget Olga Merediz. As Usnavi’s mother, she’s heartbreaking in her songs.
The final aspect of “In the Heights” that merits appreciation is the film’s message. Despite focusing on a culturally specific Latin-American community, the movie’s universal message has the power to transcend cultural barriers. The film tackles accessible topics such as community, economic inequality and immigration that will resonate with audiences in the post-pandemic era. Viewers don’t need to be musical fans to identify with Usnavi’s immigration journey. Consequently, “In the Heights” has cross-cultural appeal.
Despite its universal appeal, however, its unfortunate that “In the Heights” doesn’t quite achieve the soaring heights of its superior source material. Accompanied by Lin-Manuel Miranda’s breathtaking score, Chu keeps the movie moving at an engrossing pace during its first hour. However, once the film enters its finale, it starts to lose steam and test the viewer’s patience. In adapting a theatrical play to the big-screen, Chu misjudges differences in length between the two mediums. Whereas extended length worked for a filmed play like “Hamilton”, it hinders viewers’ engagement in this film. Thus, “In the Heights” falls short of the play.
Nevertheless, fans of Broadway will definitely enjoy “In the Heights” and so will movie-goers seeking joyous entertainment. A mesmerizing musical achievement, it proves that Broadway can still enchant movie-goers. As glimmers of sunshine in a dark pandemic, hopefully it will inspire Latin-Americans to seize moments in life no matter how unattainable their sky-high heights may initially seem.
4.5/5 stars