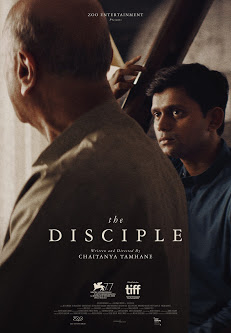 Written and Directed by Chaitanya Tamhane
Starring Aditya Modak, Arun Dravid and Sumitra Bhave
‘A Mesmerizing Music Drama’
Over the past decade or so, the Indian film industry hasn’t fared so well. Indian Cinema has long become an easy target for criticism. With their melodramatic love stories, mindless musical numbers and over-the-top theatrics, Bollywood movies have become excruciating to sit through. The problem is that the main highlight of these films has become the musical sequences rather than quality storytelling. In order to entertain mainstream audiences, filmmakers have paid the utmost attention to dance numbers. However, at the same time, they have lost sight of telling meaningful stories. Consequently, it is rare to come across modern Indian movies that are worth watching.
In an industry that has deteriorated over time, Chaitanya Tamhane’s latest film “The Disciple” is a melodic surprise. An audacious, poetic and haunting musical drama, it offers a fascinating look at the career of a Hindustani classical vocalist. With his second feature, writer/director Chaitanya Tamhane has crafted a joyous tribute to Indian Khayal music. Packed with spellbinding musical set-pieces, subtle storytelling and nuanced performances, it is one of the year’s best films. Although “The Disciple” is undeniably unforgettable, ultimately it is not a flawless film. It suffers from a slow pace that tests the viewer’s patience. Nonetheless, it offers hypnotic entertainment that will satisfy fans of Indian art-house Cinema.
Set in modern-day Mumbai, “The Disciple” tells the story of an aspiring singer that devotes his life to becoming an Indian classical maestro. Aditya Modak stars in the leading role as Sharad Nerulkar, an ambitious artist with big dreams. Under the guidance of his master Guruji (Arun Dravid), Sharad embarks on a spiritual journey to become a classical musician. However, Sharad’s dreams are crushed when he encounters setbacks in his career. As he grows older, Sharad starts to wonder whether it’s truly possible to achieve perfection anymore.
Writer/director Chaitanya Tamhane has long been fascinated with Indian culture. His directorial debut 2014’s “Court” was praised for its authentic depiction of the shameful judicial system in India. “The Disciple”, however, marks Tamhane’s first music drama and foray into the little-known careers of classical musicians in Mumbai. It’s the filmmaker’s first attempt to introduce the art of Indian classical music to American audiences on the big-screen, but he pulls it off successfully. Using spellbinding cinematography, Tamhane draws viewers into the world of a perfectionist artist searching for prosperity in an ever-changing industry. From captivating close-ups to spectacular slow-motion shots, the cinematography keeps viewers immersed in the film’s setting. Working alongside cinematographer Michał Sobociński, Tamhane creates an exquisite film in which each frame is a sumptuous feast for the eyes. Tamhane excels at immersing viewers into the world of a Marathi musician, and his latest feature is worth watching for this reason alone.
If stories of obsessive Hindustani musicians do not attract your attention, though, there are still plenty of other reasons to see “The Disciple”. The film is extremely well-made, and features the most spellbinding production values that you’ll ever see in a foreign-language movie. The production sets, musical arrangements and musical score are all carefully chosen, combining to create an immersive cinematic experience. Tamhane proves to be an expert at staging the musical concerts for his movie. Tamhane’s decision to capture the live-music concerts using long takes is risky, but it works tremendously. Whether it is the quiet concentration of singers or meticulous display of instruments, continuous long takes are effectively employed to place viewers into the concerts. Furthermore, the musical score is also worth mentioning. Aneesh Pradhan’s classical score is highly appropriate. It gives the movie an evocative and melancholic atmosphere. Through awe-inspiring technical elements, Tamhane keeps viewers engrossed in an artistic world.
Another admirable aspect of “The Disciple” is the screenplay. Tamhane’s greatest strength as a screenwriter is his ability to use minimal dialogue to convey the introvert persona of the main character. In Bollywood, most movies are dominated by loud musical numbers and rely heavily on sound to keep viewers entertained. Without song-and-dance numbers, one could argue that these movies would become rather boring. Thankfully, however, that is definitely not the case with “The Disciple”. Unlike mainstream Bollywood productions, Tamhane’s film does not feature song-and-dance sequences at all. Instead, Tamhane uses subtlety to challenge the expectations of audiences. The film successfully employs sequences of silence to illustrate the unspoken feelings of cynicism and disappointment experienced by a dispirited musician. Minimal dialogue is a tricky technique to employ in a Bollywood production. However, it works immensely in this movie. Using an unconventional screenplay, Tamhane keeps viewers absorbed in the transformative journey of a hard-working Mumbai-based musician.
It is hard to not marvel at the magnificent performances from the cast. Tamhane’s decision to cast non-professional actors rather than famous movie-stars pays off in spades.

Aditya Modak delivers a dazzling debut performance as Sharad Nerulkar. In his first ever leading role, Modak proves to be a gifted movie-star with a knack for playing struggling musicians. It is not easy to get into the mindset of an obsessive musician that aims to achieve perfection. It’s a demanding role that requires the actor to convey strong emotions without dialogue. However, Modak pulls it off effortlessly. With mesmerizing expressions, he conveys the disillusionment, longing and self-doubts of a washed-up singer that loses faith in his profession. While Modak isn’t well-known in Bollywood, this star-making performance will gain him the attention he deserves.
The supporting cast is outstanding and also worthy of recognition. Arun Dravid is astonishing and brings a sense of gravitas to the movie as Sharad’s aging mentor Guruji. Sumitra Bhave is brilliant and lends enchanting voice-work to the mystical guru Maai. And finally, it is hard to not mention Abhishek Kale. As Sharad’s inspirational father, he brings humanity to the movie.
Although “The Disciple” is a massive achievement for Indian Cinema, ultimately it is not a flawless film. If there’s a minor drawback to the movie, it suffers from a meandering pace that tests the viewer’s patience. Tamhane’s decision to tell the story of a classical musician in non-linear fashion is bold and innovative, but it doesn’t entirely work. It hinders the pacing and detracts from the entertainment-value of the movie. Due to this faulty approach, there are times when the flashbacks to Sharad’s childhood aren’t as engaging as the present-day career sequences. Moreover, it’s worth mentioning that the movie’s themes may not please everyone. The film tackles controversial topics such as artistic failure, sexual desires and spirituality that may disturb certain viewers. Viewers that are not familiar with Indian classical music may find it difficult to appreciate the movie. In light of its culturally specific message, “The Disciple” is one of those movies that may not appeal towards mainstream audiences.
Nevertheless, fans of Indian art-house Cinema will definitely enjoy “The Disciple” and so will movie-goers seeking entrancing entertainment. A sublime piece of filmmaking, it proves that Indian Cinema deserves worldwide recognition. Like a bright light-bulb illuminating in pitch-black darkness, this melodious gem represents a glimmer of hope in an industry that has long lost its magic touch.
4/5 stars