Directed by Niki Caro
Written by Rick Jaffa and Amanda Silver
Starring Yifei Liu, Donnie Yen and Tzi Ma
‘An Enthralling Live-Action Remake’
When it comes to the most adored animated films of all-time, nothing beats “Mulan”. Ever since it hit theaters over 20 years ago, the famous tale of the Chinese warrior has amassed a passionate fan following. With its colorful characters, unforgettable songs and timely feminist themes, it is considered to be an animated classic today. Given its universal appeal, the cartoon seems to deserve the cinematic treatment. However, it has never been made into a live-action film. Put simply, what works in animation doesn’t always translate well in live-action. It’s no surprise, then, that the cartoon has never been seen on the big-screen.
Now, Niki Caro brings the timeless tale of female empowerment to the big-screen for the first time in her latest film “Mulan”. A bold, action-packed and riveting live-action remake, it offers a fresh interpretation of the cherished cartoon. With her seventh feature, director Niki Caro has crafted an admirable adaptation of the animated classic. Packed with beautiful visuals, gorgeous production values and terrific performances, it is an effective live-action adaptation. Although “Mulan” is undeniably entertaining, ultimately it is not a flawless film. Its story is formulaic, and lacks the compelling character development of its predecessor. Nonetheless, it offers enjoyable entertainment that will satisfy fans of the Disney classic.
Set in Imperial China, “Mulan” tells the story of a Chinese maiden that embarks on a journey to become a war hero. Yifei Liu stars in the titular role as Hua Mulan, an adventurous girl blessed with superpowers. When Imperial soldiers arrive at Mulan’s home to enlist recruits, her elderly father (Tzi Ma) offers to participate. However, in an attempt to save her father, Mulan disguises herself as a male soldier to fight for the Imperial army. As Mulan transforms into a warrior, she becomes determined to bring honor to her family.
Director Niki Caro is a newcomer to live-action adaptations. Caro is an Australian filmmaker that is best known for her award-winning indie dramas (ex. 2002’s “Whale Rider”). “Mulan”, however, marks her first big-budget blockbuster and foray into Disney’s beloved cartoon. It’s the filmmaker’s first attempt to translate an iconic animated film into live-action format, but she pulls it off admirably. Using captivating cinematography, Caro draws viewers into the world of a Chinese heroine on a transformative journey. From revealing close-ups to jaw-dropping establishing shots, the cinematography keeps viewers immersed in the film’s setting. It gives the film a somber and realistic atmosphere that is absent from the original animated version. Working alongside cinematographer Mandy Walker, Caro creates a sumptuous film in which each frame is a breathtaking sight to behold. Caro excels at immersing viewers into the world of a fighter, and her latest feature is worth watching on Disney+ for this reason alone.
If stories of Chinese heroines do not attract your attention, though, there are still plenty of other reasons to see “Mulan”. From a technical perspective, the film is well-made and worth watching for its gorgeous production design. The action sequences, period costumes and production sets are all carefully chosen, combining to create an immersive cinematic experience. Caro proves to be an expert at staging the battle sequences for her film. Assisted by stunt-coordinator Ben Cooke, Caro uses slow-motion techniques to immerse viewers into the battle sequences. Whether it is the martial-arts fights or avalanche battle, the film features awe-inspiring action sequences that arguably surpass the animated version. Slow-motion shots are tricky techniques to employ in action scenes, but they work immensely in this movie. Moreover, the costume design is also worth mentioning. Bina Daigeler’s costume design is highly effective. Elaborate costumes are masterfully used to highlight the growth of characters. For example, Mulan’s various dresses illustrate her transformation from a working-class maiden into a courageous warrior. Through impeccable production values, Caro keeps viewers engrossed in the mystical world of Mulan.
In terms of acting, the entire cast is at the top of its game. In an exceptional ensemble, every star gets the chance to shine and leave a lasting impression. 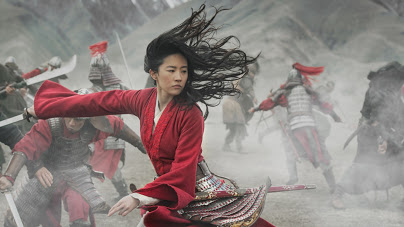 Yifei Liu delivers a breakthrough performance as Hua Mulan. In her first ever leading role, Liu proves to be a naturally gifted movie-star with a knack for playing fearless heroines. It is not easy to portray a famous animated character in a live-action remake. It’s a challenging role that requires the actress to capture the larger-than-life persona of an iconic character. However, Liu pulls it off effortlessly. With mesmerizing expressions, she conveys the bravery, determination and high-spirited nature of the legendary female warrior. While Liu isn’t well-known outside of China, this star-making performance will definitely gain her the recognition she deserves.
The supporting cast is spectacular and also worthy of recognition. Tzi Ma is marvelous and brings a sense of gravitas to the role of Mulan’s ailing father Hua Zhou. Gong Li is fantastic and imbues shades of humanity into a shape-shifting witch that harbors personal demons. And finally, it is hard to not mention Jason Scott Lee. As the villainous leader Bori Khan, he brings an air of menace to the movie.
The final aspect of “Mulan” that merits appreciation is the musical score. As a fan of the animated classic, I was rather taken aback when I first heard that this film wouldn’t feature the famous songs. Caro’s decision to eliminate the songs from the animated version has proven controversial. However, it works tremendously. Instead of employing musical numbers, Caro effectively uses an instrumental score to remind viewers of the original film. Harry Gregson-Williams’ subtle score evokes strong feelings of nostalgia and longing in the viewer. Using a minimalist musical score, Caro creates a remake that pays homage to its predecessor.
Although “Mulan” is undeniably an astonishing live-action remake, ultimately it is not a flawless film. If there’s one area where the film falters, it is in the storytelling department. The screenplay is highly problematic, and arguably the primary weakness of the movie. Caro’s decision to focus solely on the spectacle of the classic tale is bold and innovative, but it detracts from the story. Due to this misguided approach, there are times when the film feels more like a video-game than a retelling of a classic cartoon. Furthermore, the film lacks the compelling character development of its predecessor. For instance, Mulan is portrayed as an invincible superhuman with little character depth. Unlike the original animated version, this incarnation of Mulan is endowed with magical powers from the beginning and barely given a chance to grow. As a consequence, it is hard to become emotionally invested in the character. In light of its issues, “Mulan” falls short of the superior standard of its animated predecessor.
Nevertheless, fans of the Disney cartoon will definitely enjoy “Mulan” and so will movie-goers seeking family-friendly entertainment. A remarkable live-action remake, it proves that beloved animated films deserve the cinematic treatment. At a time when Mulan remains one of Disney’s most empowering characters, it’s a passionate tribute to the female warrior whose fighting spirit continues to inspire children today.
3.5/5 stars