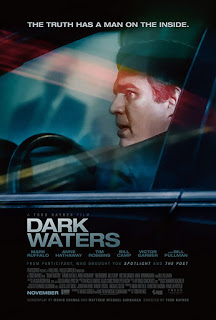 Few lawsuits against corporations have attracted as much controversy as the DuPont case. In 1998, corporate defense lawyer Robert Bilott discovered that DuPont had poisoned the local community of West Virginia. Not only did DuPont knowingly dump toxic chemicals into the environment, but it endangered the lives of citizens. As a result, Bilott took on a 20-year crusade to sue the company for its wrongdoings. Bilott risked his own reputation as a lawyer to expose the truth. With its timely themes of heroism, justice and corporate malfeasance, the lawsuit against DuPont seems to deserve the cinematic treatment. It is surprising, then, that this true story has never been told on the big-screen.

Now, Todd Haynes brings the controversial lawsuit to the big-screen for the first time in his latest film “Dark Waters”. A gripping, informative and deeply unsettling legal thriller, it offers an eye-opening look at an infuriating case. With his eighth feature, director Todd Haynes has crafted an authentic account of Robert Bilott’s legal battle against DuPont Corporation. Packed with spellbinding cinematography, smart storytelling and powerful performances, it is a highly effective legal thriller. Although “Dark Waters” is undeniably unforgettable, ultimately it is not a flawless film. It is slightly long, and suffers from an excessive running-time that tests the viewer’s patience. Nonetheless, it offers engrossing entertainment that will satisfy fans of whistleblower dramas.
Based on actual events, “Dark Waters” tells the true story of Robert Bilott’s legal battle against DuPont Corporation. Mark Ruffalo stars in the lead role as Robert Bilott, a tenacious defense attorney that defends chemical corporations. However, Bilott’s life forever changes when he is tasked by farmer Wilbur Tennant (Bill Camp) to investigate unexplained deaths in his community. Bilott discovers that the deaths are connected to DuPont and its toxic chemicals. As Bilott uncovers shocking secrets, he becomes determined to sue DuPont for its malpractices.
It’s a cautionary tale of corporate crime that is expertly told by director Todd Haynes. Ever since he burst onto the mainstream with “Far from Heaven” in 2002, Haynes has proven to be a fantastic filmmaker with a flair for telling queer stories. “Dark Waters”, however, marks his first legal thriller and foray into the life of a whistleblower. It’s the filmmaker’s first attempt to dramatize Robert Bilott’s legal case against DuPont Corporation, but he pulls it off seamlessly. Using mesmerizing cinematography, Haynes draws viewers into the life of an obsessive lawyer seeking the truth. From intimate close-ups to anxiety-inducing long shots, the cinematography keeps viewers immersed in the film’s setting. It gives the movie a dark and ominous atmosphere that is reminiscent of old-fashioned legal thrillers from the 1990’s. Working alongside cinematographer Edward Lachman, Haynes creates a stunning film in which each frame captures the nerve-wracking nature of the investigation. Haynes excels at recreating the famous case, and his latest feature is worth watching for this reason alone.
If themes of corporate crime do not attract your attention, though, there are still plenty of other reasons to see “Dark Waters”. The film is extremely well-made, and features the most astonishing production values that you’ll ever see in a legal thriller. The mise-en-scéne, shooting locations and musical score are all carefully chosen, combining to create an immersive movie-going experience. Haynes proves that he has a keen eye for scouting locations. Haynes’ decision to shoot the film in real locations where the investigation occurred is risky, but it works tremendously. Whether it is the isolated farms in West Virginia or conference rooms of corporations, the locations lend a sense of authenticity and realism to the movie. Moreover, Marcelo Zarvos’ musical score is also worth praising. It gives the film energy and momentum that is missing from most legal dramas. Using phenomenal production values, Haynes keeps viewers engrossed in the life of a heroic lawyer.
Another admirable aspect of “Dark Waters” is the screenplay. Mario Correa & Matthew Michael Carnahan’s script is spectacular, and arguably the main highlight of the movie. The greatest strength of the screenwriters is their ability to create suspenseful situations without using dialogue. In Hollywood, most movies are driven by dialogue and rely on conversations to keep viewers entertained. Without dialogue, movies often risk becoming boring. Thankfully, though, that is definitely not the case with “Dark Waters”. The film effectively uses silence to create moments of tension and paranoia. For instance, the scene in which Robert suspects that he is being stalked in a parking lot is nerve-wracking. Although there is no dialogue in this scene, it creates a sense of unbearable tension. Minimal dialogue is a tricky technique to employ in a legal thriller, but it works immensely in this movie. Using an engaging screenplay, Correa & Carnahan keep viewers absorbed in the legal case.

It is hard to not praise the phenomenal performances from the cast. Every star gets the chance to shine, but the film is mainly a stunning showcase for its leading man. 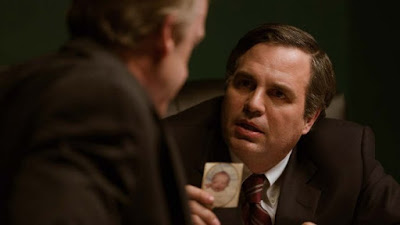 Mark Ruffalo delivers one of the best performances of his career as Robert Bilott. Following his scene-stealing turn in “Spotlight”, Ruffalo has proven to be a versatile actor with a knack for playing passionate journalists. With “Dark Waters”, however, he takes on his most demanding role to date. It is not easy to portray a real-life corporate defense attorney. It’s a challenging role that requires a great degree of dedication, but Ruffalo pulls it off effortlessly. With riveting expressions, he conveys the courage, determination and righteous fury of the heroic lawyer that sued DuPont. It’s a powerful performance from one of the most seasoned actors working today.

The supporting cast is sensational and also worthy of recognition. Anne Hathaway is amazing and brings a sense of gravitas to the movie as Robert’s supportive wife Sarah. Tim Robbins is terrific and commands every scene he is in as the domineering chairman of a law firm. And finally, it is hard to not mention Bill Camp. As the incensed farmer that initiates the case, he earns the viewer’s sympathy.

Although “Dark Waters” is undeniably an unforgettable legal thriller, ultimately it is not a flawless film. If there’s a minor drawback to the movie, it suffers from a lengthy running-time. At over two hours, it is slightly long and drags towards the end. Assisted by Marcelo Zarvos’ pulsating score, Haynes keeps the film moving at an engaging pace during the first hour. However, once the film enters its climax, it starts to lose steam and test the viewer’s patience. Haynes’ decision to cover Robert Bilott’s personal life is bold and ambitious, but it doesn’t entirely work. It hinders the pacing, and detracts from the entertainment-value of the movie. Due to this faulty approach, sequences that depict Robert’s family life are less engaging than the main investigation. Legal thrillers thrive based on the quality of their pacing, and in this regard “Dark Waters” falls short of expectations.

Nevertheless, fans of legal thrillers will definitely enjoy “Dark Waters” and so will movie-goers seeking enlightening entertainment. A fabulous piece of filmmaking, it sheds light on a little-known corporate crime in American history. At a time when modern audiences have never heard of the DuPont scandal, it’s a stirring reminder that the cases of controversial companies are worth retelling on the big-screen.