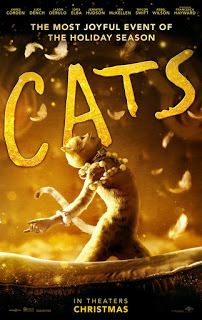 Written and Directed by Tom Hooper
Co-written by Lee Hall
Starring Francesca Hayward, Jennifer Hudson and Judi Dench
‘A Catastrophic Musical’
It is not easy to adapt a beloved stage musical to the big-screen. Broadway musicals are by definition the polar opposite of movies. In other words, what works in stage productions doesn’t always work in films. In order to make a successful adaptation, filmmakers must pay attention to the storytelling, music and characters of the original show. It is essential to capture the gist and meaning of the musical. However, at the same time, filmmakers must be aware of the limitations of movies as an art form. Due to notable differences between the two mediums, it is rare to see stage musicals that are perfectly adapted into movies. For these reasons, most musical adaptations fail to capture the magic of the original Broadway productions.
Unfortunately, this sums up the case with Tom Hooper’s latest musical adaptation “Cats”. The live-action adaptation of the beloved Broadway show is a catastrophic musical that proves to be a bad fit for the big-screen. With his latest feature, writer/director Tom Hooper has crafted a mediocre musical that doesn’t work on most levels. Packed with bombastic musical sequences, nonsensical storytelling and a wasted star-studded cast, it offers a prime example of how not to adapt a musical to the big-screen. Although it’s far from purr-fect, it is worth noting that “Cats” is not a total disaster. It is undeniably visually stunning, and makes great use of the timeless music from the original Broadway show. That being said, it offers mindless entertainment that will leave viewers miserable.
Based on the stage musical of the same name by Andrew Lloyd Weber, “Cats” follows the adventures of the Jellicle cats. Francesca Hayward stars in the lead role as Victoria, an outsider that is recruited into the tribe of Jellicle cats. Each year, the clan of cats must decide which one will ascend into the Heaviside Layer and be granted a new life. However, when an evil troublemaker known as Macavity (Idris Elba) emerges, the fate of the tribe is put in grave danger. Victoria must team up with her fellow cats to stop Macavity from carrying out his mischievous plan.

Writer/director Tom Hooper is no stranger to musical adaptations. His previous features include 2012’s “Les Misérables”, a successful adaptation of another beloved stage musical. With “Cats”, however, Hooper struggles to bring the strange concept to the big-screen. Hooper employs a technique in which the performers sing and dance live on set. It’s an approach that worked tremendously in “Les Misérables”, but doesn’t translate into movie-magic here. Using this risky approach, Hooper stages the most bombastic and nauseating musical sequences of the year. From an off-putting cockroach song to an annoying villainous tune, the film is packed with forgettable musical sequences that are sure to appall viewers. Hooper usually excels at crafting musical sequences, but his flair and talent is clearly not evident in his latest film. If there’s one reason to avoid seeing “Cats” on the big-screen, it’s for the musical sequences alone.

Amidst the mortifying musical sequences, it’s a shame that “Cats” finds little time to tell a compelling story. To be fair, the Broadway musical is known for its memorable songs rather than its nonexistent story. However, storytelling is arguably the most vital component of movie-musicals and it’s sorely missing from “Cats”. The film is poorly written, and suffers from a lacklustre screenplay. Filled with cartoonish characters, forced humour and a nonsensical plot, the script detracts from the film’s quality. The most frustrating problem isn’t necessarily the story itself, but the fact that there barely is one. Tom Hooper hops from one musical sequence to another, showing little regard for telling a cohesive story. It’s a flawed approach that leaves viewers exhausted rather than immersed in the imaginative world of cats. Musical adaptations thrive based on the quality of their storytelling, and this is where “Cats” falls short of expectations.

Nothing can save “Cats” from being a catastrophe, not even its star-studded cast. While the cast is filled with A-list stars, only a few of them get the chance to shine and leave a lasting impression.

Francesca Hayward delivers a dazzling debut performance as Victoria. In her first ever leading role, Hayward proves to be a multi-talented performer that can both sing and dance. With captivating expressions, she captures the awe and wonder of a cat that is introduced to the magical world. It’s a challenging role that requires the first-time actress to belt out famous tunes from the Broadway musical, but she manages to pull it off effortlessly. It’s a star-making performance that proves to be one of the rare highlights of the otherwise unbearable movie.

The supporting cast is sadly wasted and given limited opportunities to shine. Jennifer Hudson is a talented singer, but she is given nothing to do except weep and holler as Grizabella. James Corden and Rebel Wilson are woefully miscast as a pair of chubby cats, bringing painfully unfunny jokes to the film. And finally, the legendary Judi Dench is given her first ordinary role. It’s disappointing to see an actress of her calibre in this movie.

Although “Cats” is undeniably a catastrophic musical, it’s not a total waste of time. Despite its flaws, the film does have a few merits that are worth mentioning. As is the case with most musicals, the film features memorable music that makes it an entertaining viewing experience. Tom Hooper utilizes the songs from the Broadway musical to great effect. The songs remain as timeless as ever and are sure to satisfy fans of the stage production. Moreover, another redeeming quality of “Cats” is its lavish production design. Cinematographer Christopher Ross creates an enchanting world that is bristling with colour and life. Visually, the film is spectacular and a feast for the eyes. Ultimately, though, these minor qualities aren’t enough to make up for the film’s overarching problems.

In the end, “Cats” is a mediocre musical that will leave viewers in a state of misery. An awful adaptation of the Broadway play, it proves that some musicals are not meant to be made into movies. At a time when Hollywood seems to be obsessed with stage musicals, it’s a fur-midable reminder that what works on stage doesn’t always work on film.