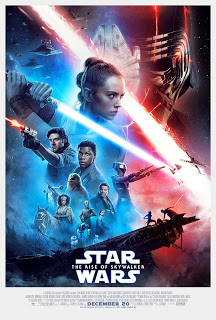 Written and Directed by J.J. Abrams
Co-written by Chris Terrio
Starring Daisy Ridley, Adam Driver and John Boyega
‘A Satisfactory Finale’
When it comes to the most beloved franchise of all-time, nothing beats Star Wars. Ever since George Lucas launched the franchise 42 years ago, it has shown no signs of losing steam. With their colourful characters, dazzling action and stunning visual effects, these films have continued to entertain movie-goers around the world. In 2015, “The Force Awakens” introduced the series to a new generation of movie-goers. Then, came 2017’s “The Last Jedi”, which proved to be a divisive entry in the franchise. Some fans loved it, while others were left disappointed. Nevertheless, fans anxiously waited with bated breath for the final film in the franchise.
Now, the wait is finally over and the series comes to a satisfying close in the latest film “Star Wars: The Rise of Skywalker”. J.J. Abrams’ long-awaited sequel is a fun but flawed film that doesn’t entirely live up to expectations. With the final instalment, director J.J. Abrams has crafted a fan-focused venture that works on some levels. Packed with exhilarating action sequences, excellent performances and iconic music, it has the essential elements of a Star Wars film. However, what’s missing from the mix is a compelling story. At nearly two and a half hours, “The Rise of Skywalker” is slightly long and lacks the cohesive narrative of previous films in the series. That being said, it offers fun popcorn entertainment that is sure to satisfy fans of the franchise.
Picking up after the events of “The Last Jedi”, “The Rise of Skywalker” follows the surviving Resistance in their final fight against the First Order. Daisy Ridley reprises the role of Rey, the trained Jedi that represents the last hope for the Resistance. Rey is struggling to find her identity, and posed with questions regarding where she comes from. When an old nemesis resurfaces, the fate of the galaxy is put in grave danger. Rey must team up with Poe, Finn and other companions in a battle that will determine the fate of the universe.
If there’s anyone that knows how to stage an exciting action sequence, it is writer/director J.J. Abrams. Returning to the franchise for a second time, Abrams proves to be an expert at staging set-pieces within the Star Wars universe. As he proved in “The Force Awakens”, Abrams is skilled at staging action and on that score he definitely delivers. “The Rise of Skywalker” is the most action-packed entry in the series to date, and features the most spectacular set-pieces of the franchise. From intense lightsaber duels to breathtaking aerial fights, the film is packed with thrilling action sequences that are sure to satisfy fans. Filmed with visual panache and propulsive energy, the action transports viewers into the imaginative world of Star Wars. Abrams excels at crafting action sequences, and his flair and talent is clearly evident in this latest instalment. “The Rise of Skywalker” is worth seeing on the big-screen for its action sequences alone.

While “The Rise of Skywalker” is jam-packed with action sequences, where it stumbles is in the storytelling department. With this latest instalment, J.J. Abrams is more concerned with getting from one action sequence to another at a breakneck speed rather than telling a cohesive story. The film consists of a collage of scenes that are strung together without a cohesive narrative. The screenplay is sloppily written, and arguably the film’s primary weakness. Filled with underdeveloped characters, unearned emotional moments and a rushed plot, the script detracts from the movie’s quality. While certain characters get the closure that they deserve, others are not given enough screen-time to shine. For instance, Rey is the only character that is given a satisfying closure. J.J. Abrams chooses to emphasize mindless spectacle over storytelling, an approach that doesn’t entirely work. Star Wars has always been first and foremost about engaging storytelling, and this is where “The Rise of Skywalker” falls short of its predecessors.

Thankfully, though, the fantastic performances from the cast keep this blockbuster from falling apart. Every actor gets the chance to shine and showcase their commitment to the franchise, but the most notable standout is the leading star.

Daisy Ridley delivers her finest performance to date as Rey. Reprising the iconic role for the third time, Ridley imbues the character with warmth, strength and humility. With captivating expressions, she brings out an emotional and vulnerable side to the character that we’ve never seen before. If Rey was portrayed as an invincible superhuman in previous films, this time Ridley brings emotional depth and nuance to the character. It is not easy to bring closure to a character’s arc in the Star Wars universe, but Ridley pulls it off effortlessly. It’s a powerful performance that serves as a fitting farewell to the beloved character.

The supporting cast is superb and seems delighted to return to the franchise. Oscar Isaac is excellent and steals nearly every scene he is in as Poe. Adam Driver is amazing as Kylo Ren and brings emotional depth to the villainous character. And finally, it is hard to not mention John Boyega. As usual, he brings hilarious comical relief and persona to these films.

Although “The Rise of Skywalker” is undeniably entertaining, ultimately it is not a film without flaws. Aside from the aforementioned disjointed storytelling, another downside to the movie is its length. At nearly two and a half hours, it is slightly long and suffers from a bloated running-time. With the help of John Williams’ timeless score, J.J. Abrams keeps the film moving at a breakneck pace during the first hour. However, once the film enters its action-packed finale, it starts to lose steam and test the viewer’s patience. The result is a movie that leaves viewers entertained but at the same time exhausted. Due to its lengthy running-time, “The Rise of Skywalker” isn’t quite on par with previous films in the franchise.

In the end, “The Rise of Skywalker” is a well-made blockbuster that soars but not high enough to meet the expectations of fans awaiting greatness. As a long-time fan of the franchise, I must admit that this movie left me slightly disappointed. If this truly is the end of the Skywalker saga after 42 years of filmmaking, it’s a bit of an underwhelming note to go out on.