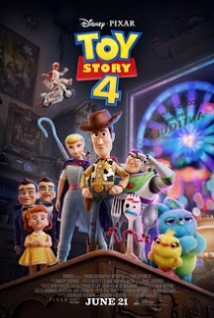 Directed by Josh Cooley
Written by Andrew Stanton and Stephany Folsom
Starring Tom Hanks, Tim Allen and Keanu Reeves
‘Fun Family Entertainment’
When it comes to the greatest animated movies ever made, nothing tops “Toy Story”. Ever since the first film hit theaters in 1995, it has become the most beloved animated series in the world. With their larger-than-life characters, playful humor and inspiring message, these films have set a high bar for the animated genre. Each entry in the series has improved and exceeded the expectations of fans. In 2010, the final film “Toy Story 3” brought the series to an emotional conclusion. However, just when fans thought that the series was over rumors floated around for a potential sequel. Fans anxiously awaited the fourth installment in the series, but the film never came to fruition.

Now, nearly a decade later the wait is over and the world’s favorite toys are back on the big-screen in the latest film “Toy Story 4”. Josh Cooley’s long-awaited sequel is a funny, heartfelt and beautifully animated film that brings the series to a satisfying conclusion. It is not easy to conclude a perfect animated series, but Josh Cooley has pulled it off effortlessly. With this fourth installment, Cooley has crafted a fantastic finale that is sure to satisfy fans. Packed with gorgeous animation, colorful characters and terrific performances from the cast, it delivers everything that fans could have possibly hoped for. Although it is consistently entertaining, “Toy Story 4” is not a film without flaws. In terms of pacing, it is slightly rushed and not quite on par with its predecessors. That being said, it offers fun family entertainment that fans of the franchise won’t be able to resist.

Picking up after the events of “Toy Story 3”, “Toy Story 4” follows the adventures of Woody and his friends with their new owner Bonnie. Tom Hanks reprises the role of Woody, the cowboy sheriff that struggles to be accepted by his owner. Woody is constantly rejected and ignored by Bonnie, who prefers to play with the other toys. However, when a new toy named Forky emerges Woody’s life forever changes. Along with his fellow companions, Woody embarks on a road trip to save Forky from a creepy doll.

At a first glance, the plot of “Toy Story 4” seems like an unnecessary ploy to milk the franchise and make money at the box-office. Arguably, the series ended perfectly with “Toy Story 3” and a fourth movie was not necessary. Nevertheless, “Toy Story 4” is beautifully made and earns its place among the finest films of the series. It is not easy to extend a flawless animated series, but first-time filmmaker Josh Cooley has done a magnificent job. With this fourth installment, Cooley has crafted a beautiful film that features the most stunning visuals of the series. Through an eye-catching visual palette, Cooley transports viewers into a world where toys have the ability to talk. It is hard to not admire the animation, which is brilliantly executed and surpasses previous films in the franchise. From the larger-than-life expressions of the toys to the detailed designs of their clothes, the film features stunning animation that is sure to satisfy fans. “Toy Story 4” is worth seeing on the big-screen for its gorgeous animation alone.

If appealing animation does not attract you to the theater, though, there are still plenty of other reasons to see “Toy Story 4” on the big-screen. Even if you’re not a fan of the franchise, it is hard to not be swept away by the story. The screenplay, by Andrew Stanton and Stephany Folsom, is extremely well-written and arguably the highlight of the movie. The script is filled with colorful characters, witty dialogue and hilarious situations. A typical trademark of the series has been the introduction of new characters with each consecutive film. With the fourth installment, screenwriters Andrew Stanton and Stephany Folsom introduce dynamic and lively characters into the “Toy Story” universe. For instance, the funniest addition to the cast is a toy known as Forky. A spork made of trash, Forky associates the garbage as his home. Woody and his friends constantly have to stop Forky from escaping into the trashcan. Using these comical characters, “Toy Story 4” keeps viewers engrossed in a world where toys can talk.

In terms of acting, the entire cast is at the top of its game and seems overjoyed to return to the franchise. Every actor lends their voice with enthusiasm and flair, but the film is mainly a showcase for its old-timer star.

Tom Hanks delivers his finest vocal performance to date as Woody. Reprising the role of the cowboy sheriff for the fourth time, Hanks brings out an emotional and vulnerable side to the character that we’ve never seen before. With heartfelt expressions, he captures the conflicted feelings of a toy that has been rejected by its owner. It is not easy to return to an iconic role after a nine year hiatus, but Hanks pulls it off seamlessly. Using his authoritative voice, he brings an emotional closure to Woody’s character arc. Its a remarkable performance that serves as a fitting farewell to the beloved character. After playing the cowboy sheriff for more than twenty years, Tom Hanks finally deserves everyone’s attention.

The supporting cast is spectacular and seems to be having a blast of fun. Tony Hale is hysterical and steals nearly every scene he is in as Forky. Annie Potts is endearing and brings genuine emotion to the role of Bo Peep. And finally, it is hard to not mention Keanu Reeves. As Duke Caboom, he brings hilarious comical relief and persona to the movie.

In addition to stellar voice-work, another praise-worthy aspect of “Toy Story 4” is the musical score. Longtime composer Randy Newman returns to score the music of the movie and does a marvelous job. From the hilarious “I Can’t Let You Throw Yourself Away” to the touching “You’ve Got a Friend in Me”, the film is packed with memorable songs that are sure to delight fans. Each song is perfectly chosen and expertly woven into the narrative. The warm, tender and nostalgic music will transport fans back to their childhoods.

Although “Toy Story 4” is undeniably entertaining, ultimately it is not a film without flaws. If I had a minor issue with the movie, it is the rushed pacing. At one hour and forty minutes, the film is slightly rushed and suffers from a short running-time. With a heartfelt score, director Josh Cooley keeps the film moving at a fast pace throughout the running-time. As a consequence, some characters get the chance to shine while others are sidelined. The film mainly focuses on Woody’s character arc, which means that supporting players such as Buzz Lightyear are given little screen-time. Perhaps, extending the running-time would have given these characters room to shine and elevated the movie to another level. Due to its pacing issues, “Toy Story 4” isn’t quite on par with previous films in the franchise.

Nevertheless, fans of the franchise will definitely enjoy “Toy Story 4” and so will movie-goers seeking family-friendly entertainment this summer season. As a longtime fan of the series, it made me tear up at the thought of saying goodbye to the toys I’ve grown to love and adore.