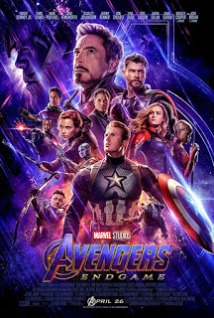 When it comes to the most entertaining superhero films ever made, nothing beats “The Avengers”. Ever since the world’s most beloved superheroes teamed up in 2012, they took the world by storm. With exciting action, colorful characters and breathtaking special effects, these films set a standard for the superhero genre. Not only did these films break box-office records, but they garnered a huge following among comic-book fans. In 2018, the previous entry in the series “Infinity War” ended on a cliff-hanger and left fans with several questions. Fans anxiously awaited with bated breath for the final film in the series.

Now, the wait is over and the avengers are back on the big-screen for the final time in “Avengers: Endgame”. Epic, exciting and emotionally resonant, the long-awaited sequel brings the superhero series to a satisfying conclusion. Packed with exhilarating action sequences, character development and powerful performances, it delivers everything that fans could have possibly hoped for. With the final installment, the Russo Brothers craft a rousing finale that bids farewell to beloved superheroes. Although “Avengers: Endgame” is undeniably entertaining, it suffers from a lengthy running time that leaves the viewer exhausted. That being said, it delivers fun popcorn entertainment that is sure to satisfy fans of the franchise.

Following the devastating events of “Infinity War” in which Thanos wiped out half the universe, “Avengers: Endgame” finds the avengers in a dire situation. Grieving the loss of their allies, the superheroes have been torn apart and left on the verge of hopelessness. All hope seems to be lost until the team come up with an ingenious idea: time-travel. The avengers assemble one last time in order to undo Thanos’ actions and restore order to the universe.

It is then that we are swept into a grand superhero spectacle that offers exciting action, intimate drama and irresistible popcorn entertainment. Due to the Russo Brothers’ deft direction, it all comes together seamlessly in a satisfying package. Returning to the franchise for the second time in a row, the brothers prove once again that they know how to perfectly stage action. Like two children playing with their favorite action-figures, the Russo Brothers stage the most exhilarating action sequences of the franchise. From the inventive time-travel sequence to the emotional finale, “Avengers: Endgame” features breathtaking action sequences that are sure to keep fans entertained. It is hard to not marvel at the action sequences, which are brilliantly executed and raise the stakes for the heroes. “Avengers: Endgame” is worth seeing on the big-screen for its action sequences alone.

If exciting action is not what attracts you to the theater, though, there are still plenty of other reasons to see “Avengers: Endgame”. Amidst all the thrilling action, the film finds time for intimate moments of character development. This time around, we truly care about the avengers and whether they will survive their final mission. Surprised? So am I. But in the best possible way. Sometimes, there’s so much action in superhero movies that the story gets lost in a shuffle. Thankfully, though, the Russo Brothers avoid these pitfalls with “Avengers: Endgame”. Instead, the filmmakers manage to achieve a balance between different elements such as the characters, story and action. If previous entries in the franchise shortchanged some characters (ex. Hawkeye), this time each avenger is given their chance to shine. It is refreshing to see a comic-book movie that pays this much attention to character development.

In terms of acting, the entire cast is at the top of its game. In the year’s most star-studded superhero ensemble, every actor gets the chance to shine and leave a lasting impression.

Robert Downey Jr. delivers his finest performance to date as Tony Stark/ Iron Man. Reprising the role for the tenth time, he is charming, charismatic and witty. In his final outing, he brings out an emotional and vulnerable side to Tony Stark that we’ve never seen before. With soulful expressions, he captures the grief, sadness and rage of a man coping with loss. It’s a powerful performance that serves as a fitting farewell to the character. Although actors that play superheroes rarely ever receive awards recognition, this career-defining performance is an exception. After donning the Iron Man suit for nearly eleven years, Robert Downey Jr. deserves everyone’s attention.

The supporting cast is excellent and also worthy of recognition. Chris Evans is amazing as Captain America, bringing gravitas and a sense of humanity to the film. Chris Hemsworth is hilarious and steals nearly every scene he is in as Thor. And finally, it is hard to not mention Jeremy Renner. As Hawkeye, he showcases his emotional range in a poignant performance.

Although “Avengers: Endgame” offers satisfying popcorn entertainment, ultimately it is not a film without flaws. If I had a minor issue with the movie, it would be the lengthy running time. At nearly three hours, the film is slightly long and drags during its first hour. The first half of the film, in which the avengers cope with the loss of their allies, is particularly slow and requires a bit of patience. It isn’t until the finale that the movie picks up in momentum and energy. Viewers looking for an action-packed ride may be disappointed, because this film isn’t that. Instead, it’s a slow-paced superhero film that takes its time to unfold.

Nevertheless, fans of the franchise will definitely enjoy “Avengers: Endgame” and so will movie-goers seeking fun popcorn entertainment this summer season. Not only is it a satisfying finale to the series, but one of the better comic-book films in recent memory. If this truly is the last time we see the avengers assemble on the big-screen, it’s a fitting farewell to the superheroes we’ve grown to love and adore.