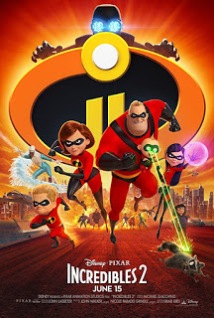 Written and Directed by Brad Bird
Starring Craig T. Nelson, Holly Hunter and Samuel L. Jackson
‘A Spectacular Sequel’ When it comes to the most beloved animated films of all-time, “The Incredibles” is definitely one of them. Ever since it was first released in 2004, the film captured the hearts of movie-goers around the world. With its winning combination of action, humor and colorful characters, it set a high standard for the animated genre. It is one of those rare animated films that appealed to both kids and adults alike. Due to its huge success at the box-office, the film left the door open for a sequel. However, fans waited for years as the idea of a sequel floated around but never came to fruition.
Now, nearly fourteen years later, the world’s favorite superhero family is back on the big-screen in “Incredibles 2”. Was it worth the wait? Absolutely. Pixar’s long-awaited sequel that has been years in the making lives up to the hype. Packed with plenty of laughs, exhilarating action and terrific performances from the voice-cast, it delivers everything that fans could have hoped for. Whether it is the goofy humor or insightful message about parenting, the film offers family-friendly entertainment that both kids and adults will enjoy. Although it is not quite as incredible as its predecessor, “Incredibles 2” is a spectacular sequel that will satisfy fans that have waited for years to see the superhero family on the big-screen.

Picking up moments after the first film ended, “Incredibles 2” focuses on the Parr family and their struggle to survive in a world where superheroes are illegal. Following the destruction of the city, the Parr family is forced to go into hiding and live a normal life. While Elastigirl is out saving the world on her own, Bob is left at home to take care of the children which have superpowers. When a new villain hatches a dangerous plot, the family must reunite to fight their greatest foe yet.

If there is anyone that knows how to make a visually appealing animated film, it is writer/director Brad Bird. As he proved with the original “Incredibles” and the dazzling “Ratatouille”, Bird knows how to make visually gorgeous films. His films are always a feast for the eyes, and filled with exciting action. And “Incredibles 2” is no exception. With eye-catching visuals, Bird immediately draws the viewer into the world of the Incredibles. Visually, the film is sleek and stylish in the vein of a 1960’s spy thriller. It is hard to not marvel at the visuals, which rival the first film and are arguably more impressive. Although it has been fourteen years since the first film came out, the gorgeous visuals prove that the wait was well worth it.

Using these stunning visuals, director Brad Bird stages the most exciting action sequences of the year. As one might expect from a superhero movie, “Incredibles 2” is filled with thrilling action from start to finish. This time around, the action centers on Elastigirl and her new mission. There are plenty of exhilarating action sequences involving Elastigirl that will please fans of the original film. Perhaps, the most unforgettable action sequence involves the female heroine chasing down a speeding train. Its a scene that works tremendously due to the combination of adrenaline-pumping music and gorgeous visuals. “Incredibles 2” is filled with exciting action sequences that are arguably better than most live-action superhero movies. It is rare to see action that is this well-executed in an animated film.

Amidst all the thrilling action, “Incredibles 2” finds time for welcome moments of humor. In the spirit of 2004’s original film, it is funny, goofy and at times hilarious. Although the humor is mainly aimed towards children, there are plenty of jokes that will appeal to adults as well. The humor in the film centers on Mr. Incredible and his inability to raise children with superpowers. Whether he is caring for the naughty baby Jack-Jack or helping his son Dash with Math, Mr. Incredible struggles to keep his family together. Its a situation that any parent would be able to relate to, and it makes for the funniest moments in the film. It is hard to not burst into laughter when Mr. Incredible interacts with his children, particularly Jack-Jack. 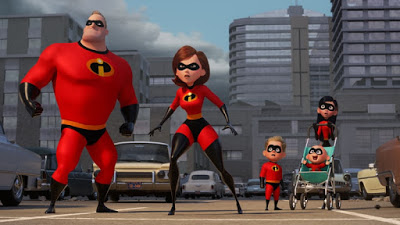 These colorful characters are vividly brought to life by a talented voice-cast. The entire cast is at the top of its game and seems to be having a blast of fun. Perhaps, the most memorable standout in the cast is Craig T. Nelson in the role of Mr. Incredible. It is not easy to return to an iconic role after nearly fourteen years, but Nelson pulls it off with surprising ease. With charm, charisma and wit, he captures the persona of a stay-at-home father struggling to raise his children. His voice lends warmth and humility to Mr. Incredible, making him a sympathetic character. It’s a marvelous voice-performance that proves that Nelson was born to play this role. It is hard to imagine anyone else playing this iconic character.

The supporting cast is excellent and brings back the beloved characters of the original film. Holly Hunter continues to shine in the role of Elastigirl. Samuel L. Jackson is as always a joy to watch as Frozone. And finally, it is hard to not mention Eli Fucile. As Jack-Jack, he steals nearly every scene he is in and brings hilarious comical relief to the film.

Although I thoroughly enjoyed “Incredibles 2”, it is not a film without flaws. If I had a minor issue with the film, it would be the lackluster villain. With clunky motivations and a stereotypical plan, Screenslaver is a villain that hardly comes as a threat to the heroes. Its a disappointment, especially when you consider the compelling villain that the first film offered. In 2004’s original film, the villain was truly menacing and tested the heroes. In comparison, the villain in this sequel lacks a backstory and proper motivations. The villain department is one area in which “Incredibles 2” falls short of its predecessor.

Nevertheless, as a whole one can’t deny that “Incredibles 2” lives up to the hype. Fans of the original will definitely enjoy it and so will movie-goers seeking family-friendly entertainment. Is it as incredible as the first film? Not quite, but it comes close to capturing its magic. As someone who grew up with the original, this sequel brought back fond memories of my childhood that are almost impossible to ignore.