Directed by Anthony and Joe Russo
Written by Christopher Markus, Stephen McFeely and Ed Brubaker
Starring Chris Evans, Scarlett Johansson and Samuel L. Jackson
‘A Marvelous Superhero Sequel‘
Superhero movies live or die based on the quality of their villains. Whether it’s a physically intimidating antagonist or a smart genius that uses brains to trick the hero, villains have always played an important role in superhero films. When created with depth, they uplift these types of films to another level. However, if they don’t come across as a threat at all, any superhero movie is doomed to failure.
Every once a while, however, comes a comic-book movie that has the perfect villain. For instance, 2008’s “The Dark Knight”, one of the best superhero movies ever made, gave us one hell of a memorable villain with the Joker.
This year, it’s “Captain America: The Winter Soldier”, a tremendously exhilarating, exciting and surprisingly emotional follow-up to 2011’s “The First Avenger”. One of the most well-balanced movies I’ve seen in recent memory, this film is simply the definition of fun entertainment. It features a fantastic cast at the top of their game, a mesmerizing balance of humor, action and drama and improves on the quality of it’s predecessor. Yet perhaps it’s greatest accomplishment is the most unexpected: a highly fascinating villain that you actually end up caring for. If there’s one complaint that I always file against superhero movies it’s that their villains often lack interest, but that’s definitely not the case with “The Winter Soldier”. The result is a remarkable movie reminding the world why superhero films are money marvelously spent.
Who’d have ever thought that a Marvel comic-book movie could turn out to be something more than just entertainment? Certainly not me. From the action-packed Iron Man trilogy to the undeniably fun “Thor”, Marvel’s superhero movies have always been entertaining. However, when it comes to stirring the emotions of audiences around the world, most have failed miserably. “The Winter Soldier” is that rare superhero movie in which you end up caring about the lead characters not only because they are bad-ass but also because they feel like real human beings.If by any chance, like me, you immediately forgot about 2011’s rather mediocre “The First Avenger”, you may be pleasantly surprised by this sequel. Starring Chris Evans as the titular hero, it’s story picks up in a modern-day setting where an old threat known as ‘Hydra’ threatens to forever destroy Capt. America’s world.

If there’s any directors in Hollywood at the moment that know how to perfectly craft a sequel, it’s Anthony and Joe Russo. Like two detectives closely examining a murder-site, they have discovered the faults of the original “Captain America” and greatly improved on them with this follow-up.

This time around, one can’t help but feel exhilarated by the sharp writing that was missing from the original. By turns witty, hilarious and smart, the dialogue fleshes out each character so that we are able to care for them and relate to their situations. Whereas the first film opted for action sequences over developing characters, “The Winter Soldier” solves this problem. For example, the character of Captain America was given little personality in the first film but in this sequel you relate to him. Struggling to overcome past regrets and adapt to a new lifestyle, he faces challenges in life that any ordinary human being would. Unlike most superheroes, this makes him a person you can easily identify with.

As is the case with any superhero movie these days, the film is also worth watching for it’s action sequences alone. Although it features what you normally come to expect from comic-book movies like loud explosions and collapsing buildings, the action stands out due to it’s realism. Whether it’s hand-to-hand combat or an intense car chase, the level of suspense is heightened by the feeling that the action could actually happen in real life. Using shaky-camera can often detract from a film by making you feel uneasy, but in “The Winter Soldier” is it used to perfection. The result is possibly the most exciting action sequences you’ll get to see in a superhero movie this year.

In terms of acting, the entire ensemble is at the top of its game. Each of the performers have a blast playing larger-than-life characters, and bring a level of depth to their roles not often seen in comic-book movies. 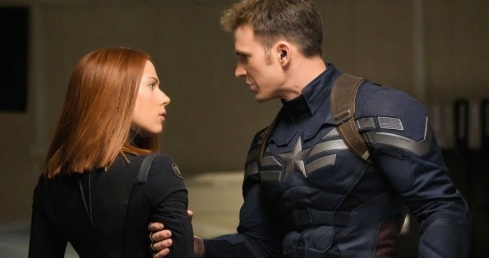 Chris Evans is superb in the role of a confident, yet conflicted superhero struggling to overcome regrets of his past. Evans has always been one of those actors only associated with charming looks but in “The Winter Soldier” he delivers more than what you’d come to expect from a star of his caliber. Not only is he instantly likable, he also brings a humanity to the screen that makes him more relatable than your typical superhero. Having grown into the character of Captain America with great ease and comfort, it’s hard not to marvel at the way Evans has turned his career around as an actor.

Scarlett Johansson knocks the role of Black Widow out of the park, delivering her most unforgettable portrayal of the seductive heroine yet. After being underused in previous films (ex. “Avengers”), she has finally proven herself to be the ideal actress for the role. Charming, sharp and hilarious to watch, it’s a performance that proves that it is possible for a female character to stand out in a superhero movie.

The final standout in the cast is Sebastian Stan as a mysterious assassin. Despite having little to no dialogue in the film, this actor sends shivers down your spine through his intense presence. Although this performance reminded me of Bane from 2012’s “The Dark Knight Rises”, it’s a unique spin on creating an antagonist and unlike any villain Marvel has ever created before.

In the end, though, what truly makes this superhero movie memorable is neither the stellar performances nor the exhilarating action sequences. It ultimately boils down to one hell of a clever plot twist that uplifts “The Winter Soldier” into being one of the most personal comic-book movies of the last decade. To avoid giving away spoilers, all I’ll say is that this is one of the few superhero movies I’ve seen where I’ve felt sympathy for the villain.

Although “Captain America: The Winter Soldier” is the most fun I’ve had at the movies in recent memory, it’s not a film without a few problems. To begin, Robert Redford feels totally out-of-place in this film. Amidst a cast of talented young actors, his presence seems awkwardly forced and unnecessary. Redford, a celebrated actor, is wasted in a role that didn’t need to be in the film in the first place.

Another disappointment is surprisingly a rather forgettable soundtrack. Superhero movies have always been associated with great music, using it to establish mood and a sense of atmosphere. Whether it’s John William’s score for the original “Superman” or Hans Zimmer’s outstanding score for last year’s “Man of Steel”, comic-book movies have always had memorable soundtracks. In the “Winter Soldier”, however, the music just doesn’t offer the excitement one would come to expect from a superhero film. The inspiring theme for 2011’s original “Captain America” has been replaced with a soundtrack that you’ll forget about as soon as the film ends.

Needless to say, if you’re a fan of superhero movies or are looking for fun Summer escapism, it would be a crime to miss out on “The Winter Soldier”. Even if you aren’t the biggest comic-book fanatic, you may find yourself genuinely surprised by the results.