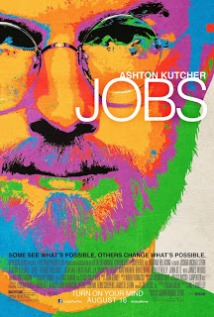 Directed by Joshua Michael Stern
Written by Matt Whiteley
Starring Ashton Kutcher, Josh Gad and J.K. Simmons
‘More Entertaining than Enlightening’
One of the more overlooked, underrated and unfairly abandoned movies of this Summer season is “Jobs”. A small-in-size, yet tremendously entertaining biopic on the world-famous innovator, it’s been panned by critics worldwide: currently holding a “smashed-into-pieces” rating of 27% on Rotten Tomatoes. Although there’s  plenty of shortcomings to this quick-paced drama, the film doesn’t deserve such a low consensus. Especially from a website that has over the years, become the go-to, most followed vehicle for movie reviews.
I guess it may be due to a startling combination of two things: false advertising and high-pitched expectations. Whenever movies have both, they tend to suffer as entertainment. Out of all the numerous genres that surface filmmaking, the biography grouping falls into this trap quite often. Movie-goers are usually thirsty for a full-fledged, complete biopic of their idol or favorite celebrity. While this happened quite often in the 1960’s with motion pictures such as “Gandhi” and “The Lawrence of Arabia”, the trend has come to an abrupt end in this age. Nowadays, it hardly ever comes into being as studios deem it too risky to extend running times. After all, box-office success comes at the cost of pleasing most audiences and not every movie-goer loves to sit through nauseatingly long, 3-hour entertainment.

If watching a shorter biopic is your cup of tea instead, then Joshua Michael Stern’s “Jobs” may be worth your time. A lightheartedly crafted and well-acted rendition of Steve Jobs’ life, it traces the entrepreneur’s years as a college-slacker to the inevitable creation of the first iPod. Starring in the central role is none other than a confident Ashton Kutcher, in perhaps the most difficult role of his career. The young heartthrob, mostly know for his roles in Romantic-Comedies, faces the daunting challenge of portraying a multi-faceted genius. A massively celebrated passion who influenced an entire generation of geeks seems like a bit of a “jump-off-the-cliff” terrifying choice for an actor like Kutcher. He’s never, in a limited career, been exposed to such material. Nor has he been praised for any of his performances before. Shall he succeed?

Quite miraculously, he pulls off the impossible even if the film surrounding him is a tad under-cooked. As the world-famous tech wizard, this young star remains as distinguished as Jobs himself: commanding and compelling in what might just be his finest performance to date. It’s a surprising feat, particularly when you consider the fact that nearly everyone would have expected a more well-known, praised performer for the role. Perhaps, someone with more experience in the industry. But no worries. Kutcher has finally received the opportunity to display his talent for acting, and he certainly makes use of it. Capturing the vivid, tense personality of the innovator with impressive ease, he comfortably evokes the many sides to the genius; the passion, aggressiveness, determination, as well as his inescapable anger-management issues.

It never occurred to me that an actor would be able to display all these characteristics in one, single performance. The astonishing outcome, that an unlikely talent like Kutcher has put the cherry on the top, makes his act utterly stunning. 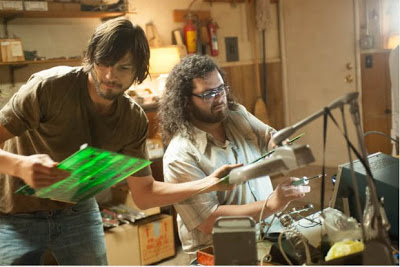 It’s a shame that the rest of the movie isn’t as- for the lack of a better word- captivating. Director Joshua Michael Stern only seems to be interested in a slice of the entrepreneur’s life, instead of the big picture. While what he captures on screen is an interesting dive into Jobs’ worklife (the way he treated colleagues and his ambitious stride), the man beneath those motivations is never revealed. Perhaps, it’s due to the unbalanced nature of the film’s narrative. Joshua Michael Stern forcefully rushes through the innovator’s school days, personal life, and time in India only to arrive at his career. It’s a crowd-pleasing decision made for the more commercial viewer, yet it comes at a high cost: a lack of depth. Despite the fact that (by the end of the movie) we get to know Jobs quite well as a person, the film is merely an introduction to his life.

In other words, like an unsolved jigsaw puzzle, it appears to be incomplete. The kind of person Jobs was outside of work, as a father-figure or husband is hardly touched upon. Much of the interesting aspects of this innovator’s life; such as his relationships with other techies and his own family are casually shut in a bin. Whenever they’re explored, it’s in 2-minute “get-it-done-as-fast-as-possible” scenes that awkwardly lead nowhere. Take for example, Jobs’ love-hate rivalry with fellow-innovator Bill Gates. What at first glance, seems like an intriguing relationship between the two, is unfairly reduced to a single phone-call argument.

Regardless, these deficiencies don’t entirely have an effect on “Jobs”. Revitalizing substance comes in the form of fascinating corporate-world mechanics, highlighting the innovator’s financial struggle in a bumpy career. This part of the movie- if not enlightening- is quite entertaining and delightfully humorous. Packed with punchy, surprisingly witty dialogue, as well as dazzling musical numbers, it’s a suitable replacement for the lack of depth.

So are the casting choices. While the supporting performers aren’t the most well-known of stars, they still manage to make memorable impressions. Josh Gad, in particular, is highly charismatic; providing most of the film’s comedic relief and unexpected emotions. As the co-creator of Apple, the star shines brightly in a scene where his character says a final good-bye to one of his closest friends.

If you’re willing to spare a somewhat impactful, yet abrupt ending, as well as the frustrating lack of depth, then “Jobs” might win you over. Even if it isn’t the most satisfying, and enlightening tribute to the famous innovator’s life, this simple-minded biopic is an entertaining ride worth sitting through.

Whether Jobs himself would’ve applauded it is questionable though. Being a highly ambitious perfectionist, he probably would have sent this project back to the boardroom to work on it for years. Still, I can easily imagine the entrepreneur being pleased due to Kutcher’s electric performance, at the very least.