Directed by Klay Hall
Written by Jeffrey M. Howard
Starring Dane Cook, Stacy Keach and Priyanka Chopra
‘A Time Pass at Best’
If there’s any film that’ll divide the opinions of kids and adults this year, it’s Disney’s “Planes”. An unwieldy mix of rehashed ideas and familiar characters, it’s an uninspired effort to grab money from audiences around the world. The kind of effort that fails to resonate with more than one audience: sending kids soaring into the sky but only crash-landing the adults. Although sitting at 3rd place on box-office charts, and winning the hearts of children is an accomplishment in certain ways, this mediocre flyer doesn’t quite deserve any of that.

What it does need, on the contrary, is a sense of excitement or originality. Most of the animation movies- released over the last decade or so- have sparked that quality. Films such as “Ratatouille” and “Up” have invigorated a mere genre of cartoons, that was initially only meant for children, into something more: a treat for adults as well. Academy Awards and reserved spots on best-of-all-time lists show that when it bursts with memorable characters and meaningful messages for children, an animation flick can get recognized. Unfortunately enough, “Planes” offers none of that on it’s limited agenda. It’s a generic, formulaic and highly predictable motion picture only designed for the sake of making money.

Is Hollywood running out of ideas? This forgettable entertainer is inevitable proof that the industry desperately needs creativity, perhaps even imagination for that matter. Set in the world of 2006’s magical “Cars”, the children-friendly outing presents a been-there-done-that underdog story. One that we’ve seen a million times before, and as a result it’s clear which direction “Planes” is going to take even in it’s first few frames. Dane Cook stars as Dusty Crophopper, a cropdusting plane that feels out-of-place in his job. He dreams of competing in a famous global race, but in the way is a pondering fear of heights. Can this inexperienced underdog overcome his obstacles and hoist the trophy of the competition?

Whether or not he succeeds doesn’t matter because the movie itself mostly doesn’t. It’s a lazy, extremely laid-back 92 minutes featuring characters we’ve seen before and a story that has been overused to the point of predictability. Nothing has been done to spice up these familiar elements, with the exception of colorful voice performances and a few instances of chuckle-worthy humor. But forget about creativity; this is as dull as animation flicks get. The kind of movie that brings forth the taste of a bland dish; nearly flavorless in it’s proceedings. Although there is flavor to this animation-caterer, it’s been tasted before in none other than 2006’s “Cars”. “Plains” fails in creating the magic, or irresistible charm of “Cars”. Yet whatsoever the consequences, it steals various ideas from that film.

So ensues the struggle to find anything innovative in a movie that’s borderline effortless. As seen with usual animation fare, interesting characters can draw attention of viewers even in the worst of circumstances. While Disney’s latest outing does offer that element, it’s not without problems. What most of the characters lack is a sense of originality; they’re far too familiar in infrastructure. Headlining the list of these creations is Skipper, an elderly, navy war plane with a troubled past. He’s a solemn, seemingly pre-occupied flyer in a film that’s otherwise filled with upbeat characters. A dark past haunts him tremendously, and while this makes the plane stand out in the midst of other creations, he’s a familiar lad. One can’t help but compare him towards the character of Doc Hudson in 2006’s “Cars”. Similarities between the two are quite bright: the fear of ever competing in a race again, wounds from the past that haven’t healed and a mentor-like personality that others look up to. 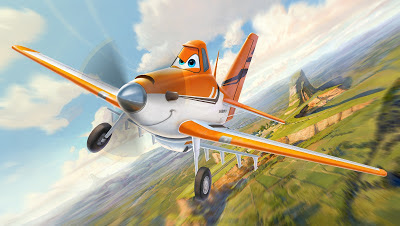 Thankfully, though, the other individuals in “Planes” aren’t as rehashed as Skipper. Traces of familiar, stereotypical roles are splattered across the board like paint on a canvas, yet they’re invigorated by fabulous voice performances. Since this animation caterer follows a competition that spans the entire globe, what we get is a rare treat of a cast. One that’s, quite surprisingly, multicultural enabling a variety of voices ranging from France, Britain, Italy and even India. Watching well-known actors such as Dane Cook interact with the less popular like Carlo Alazraqui, is a delightful joy.

Too bad the rest of the film isn’t. Visually warm colors and a bunch of talented voice performers aren’t enough to make up for a downright dull story. “Planes” isn’t able to find an interesting tone either; staying away from the heartfelt emotion of Pixar fare as well as the irresistible humor of Dreamworks’ efforts. Perhaps, its due to the fact that this is only the second directorial outing of filmmaker Klay Hall.

His inexperience comes at a cost, causing an upset for adult audiences while pleasing the younger ones. Take for example, my views on the film compared to those of a young child. The child was enthusiastically taking laps around the Cinema hall to show his appreciation for the movie. I, on the other hand, remember being utterly perplexed by the lack of innovation. Maybe these kinds of films aren’t meant for everyone, after all…