Directed by David Fincher
Written by Jim Uhls (based off screenplay by Chuck Palahniuk)
Starring Edward Norton, Brad Pitt and Helena Bonham Carter
‘Inventive Storytelling’
Movies tend to be highly predictable these days. Taking familiar routes and ending on a bulls-eye expected note has become one of Hollywood’s most common, irritating trademarks. It’s present in the majority of the industry’s movies- romantic comedies are unfairly restricted to one given conclusion, most superhero capers have to follow a set of rules and even action-packed blockbusters ride through familiar territory. But why? Are filmmakers afraid of stepping out of their comfort zones or do they just want to grab cash in an effortless way?

Some have relied on predictability tremendously. If there’s one director who hasn’t, however, it’s David Fincher. And no film proves this more than his boldly crafted “Fight Club”. The adaptation of Chuck Palahniuk’s novel (of the same name), this isn’t just a motion picture about fighting- it’s an inventive, complex and groundbreaking satire that completely refuses to follow any generic formula. Infusing the viewer into it’s dark, dingy world uniquely, it’s the kind of film that grabs your attention and never lets go. In spite of a long running time of over 2 hours, there isn’t a dull moment. It engages like a sped-up roller-coaster ride throughout, ending on a truly out-of-ordinary note: a twist so jaw-dropping and thought-provoking that it literally leaves one gasping for more.

The title of this film advertises it as a throwaway blockbuster stamped in Hollywood cliches. Resoundingly enough, the movie is the polar opposite. Violence and bloodshed are galore, but there’s much more to the story than just fight scenes. Following a man’s descent into absolute insanity, “Fight Club” is a rich, extremely detailed character portrait.

Edward Norton stars in the leading role as an unnamed person only known as ‘the Narrator’. He’s a frustrated, deeply preoccupied loner suffering from Insomnia. Clearly unusual, he has a tendency to be highly pessimistic about life. In rather simpler terms, he hates everything about living: his job, the inability to sleep and the fact that nobody is there to love him. Irritated, he goes as far as to joining psychological therapy sessions. At another point, he appears to have a strong desire to commit suicide.

Yet everything changes when the Narrator meets Tyler Durden (Brad Pitt). A soap salesman, Durden is quick and sharp-witted in his interactions with people. He also has fascinating beliefs as strong as those of some famous leader. Intrigued by Tyler’s persona, the Narrator befriends him and together they form a fight club to let out their resentments towards society. What, at first, only seemed like a past-time hobby gradually turns into a rebellious revolution.

Having helmed visually distinguished movies such as “Seven” and more recently “The Social Network”, David Fincher excels as a visual director for “Fight Club” as well. Here his trademark style is absolutely riveting to watch: the dark, Gothic and strange visuals are haunting yet refreshingly unique. From the creative “inside-of-the-brain” opening scene down to the daunting destruction conclusion, there isn’t any shot that doesn’t bubble with excitement and a provocativeness. Driven by strong ambitions plus jarring fearlessness, Fincher and cinematographer Jeff Cronenweth reach unprecedented feats. Their greatest accomplishment is that even though many of the scenes in “Fight Club” are agonizing to watch, their dazzling visuals make it hard to look away.

Although it’s a step down from the external representation, the storytelling is notably top-notch. You want to learn how to use narration? Use this beautifully told story as an example; it uses the concept of narration to the greatest potential possible. Here the narrator (played by Edward Norton) lets the audience in on whatever he’s thinking or feeling in his life. It’s a deep dive into the psychology of his mind and how it works. The hopelessness, desperation and confusion that this character faces comes across in a very fluent manner. Perhaps the most enlightening result, however, is that it allows the viewer to come up with their own observations about certain characters. By the end of “Fight Club”, it feels like you’ve spent an entire month getting to know them. 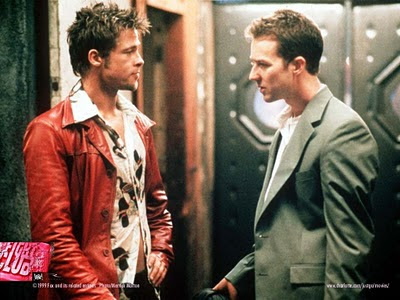 Casting choices are spot-on perfect, and as a result the performers adeptly bring spark to their characters.

With his brutally honest personality and sharp nuances, Edward Norton is a phenomenal revelation who’s talent instantly becomes clear once his character is introduced. Completely disappearing into his role, the actor pulls of a difficult, almost daunting job: making the audience care for an insanely unlikable person. Normally when the protagonist is likable, it’s easy for an actor to make them sympathetic in nature. Yet, if the character isn’t, the role grants a highly talented performer to pull off the job. Norton is that actor, and he hits a home run with his performance here. Considering everything from a distinct tone of voice to intense expressions to perfect comedic timing; he doesn’t hit a single bogus note. Neither does he imitate other performers. It’s an original showcase that deserved recognition/awards at the time of the film’s release; unfortunately enough it didn’t get noticed at all. Let me tell you something: the Academy Awards made a huge mistake…

Just as superb, if not better than Norton is a young, greatly distinguished Brad Pitt. In one of his more iconic roles to date, the seasoned actor possesses a charming, undeniably charismatic screen presence. Almost irresistible in fact. Whether he’s seamlessly delivering the witty, rat-a-tat dialogue in the movie’s plane sequence, or the solemn straightforward rules of a fight club, this actor never disappoints. Not one bit. It’s a role that’s as tough as steel to do justice to, yet Pitt tunes in one of his best performances ever.

Thanks in part to an appropriately dark and mesmerizing soundtrack, director David Fincher keeps the proceedings hypnotically engaging. Just when the film seems to be leaning towards a conventional end, this filmmaker breaks the trend of traditional Hollywood cliches that we usually come to expect from such films. At a cost, he throws a twist in the mix. Its a twist so mind-boggling and complicated that it entirely, doesn’t make a whole lot of sense. Complex it is most definitely, but Fincher’s execution falls apart in the explaining and mechanics of such a strong turn of events. Questions are left unanswered when you start to think about it too much.

Regardless, smart techniques such as masterful foreshadowing plus crucial dialogue make “Fight Club” a near-perfect piece of Cinema. A surprisingly relevant one for modern-day-world due to it’s themes of terrorism and rebellion.

Oops…looks like I just broke the first rule of “Fight Club”, which was not to talk about it. But I’ve let everyone in on the secret for good reason: they don’t make movies like this anymore.