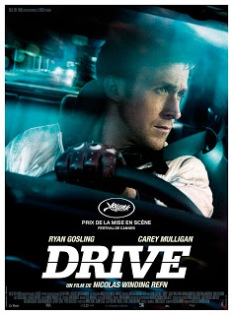 Directed by Nicolas Winding Refn
Written by Hossein Amini (based off book by James Sallis)
Starring Ryan Gosling, Carey Mulligan, and Albert Brooks
‘The Man Without a Name’
When people hear of a movie called “Drive”, I wouldn’t be surprised if they dismiss it as a typical Hollywood mainstream film. And I can understand why. As an industry, Hollywood has a bad habit of producing disposable action movies for mainstream audiences. Many have obvious names that signify the theme of the movie, causing some audiences to disregard them completely.
“Drive” is definitely not one of those typical action movies that can be disposed. Though it’s title is vaguely reminiscent of a mainstream movie, it is something completely different. Yes, there are car chases and there is violence, but this film is much more than your average movie-going experience.
Directed by Nicolas Winding Refn, “Drive” follows an enigmatic man played by Ryan Gosling. Working as a mechanic, getaway driver, and Hollywood stuntman, he is a very introverted loner. When he starts a relationship with a neighbor, everything spirals out of control as he lands himself in deep trouble with two gangsters.

The first thing to take note of is this movie’s targeted audience. Since this film is tremendously different from widespread movies these days, not everyone will like it. The pacing is slow, which is crucial in building up the story before violence appears. And the violence shown is nasty and quite gratuitous. It may be too harsh even for the avid movie-goer. If you cannot take gruesome violence, then this may not be the movie for you, but if you can sit through it, “Drive” is a must-watch by all means.

Here is an unusual movie which in a way, celebrates Cinema itself. Orchestrated by simple, but effective storytelling, the film is a like a beautiful painting: visually stunning and meticulously crafted. Nicolas Winding Refn’s atmospheric direction, combined with a fantastic score and amazing performances invigorate “Drive” into a piece of art.

The film features award-worthy direction that was not fully recognized during award-season. The opening sequence along with the credits, define the movie’s great direction. Starting with an undeniably intriguing monologue from the lead character, “Drive” soon ascends into an atmospheric film. Though the movie changes tones after it’s opening, it still maintain’s the same intriguing value throughout. Refn’s choice of music and setting propels this film to another level. The soundtrack is wonderfully composed, featuring fitting electronic-pop music, while the setting is brought to life through distinct cinematography. Notable to mention, Refn establishes the mood and pacing of this movie strongly. The film is perfectly paced with a mood that is distinct and unique.

Ryan Gosling delivers one of the most fascinating performances of the decade. It is acting on such a high level that it literally carries the movie. As a mysterious, quiet man Gosling completely immerses himself into his character through electric screen presence and intense expressions. There is immense complexity behind his character, due to the fact that not much is revealed about him. Yet even when there is little character development, Gosling is a true performer, one to marvel at because he has never been better.

In a terrific supporting cast, Albert Brooks and Ron Perlman are at the top of their game as ruthless antagonists, while Carey Mulligan and Bryan Cranston are also worth mentions.

For a movie so strong in almost every aspect, one would not expect problems. However, the only thing about “Drive” that bothered me was the lack of character development for supporting characters. Gosling’s character isn’t thoroughly developed but that is just his role; supportive roles such as Carey Mulligan’s character could have had a stronger character arc, but then again that is only a minor gripe.

“Drive” seems like the kind of movie people would show in film school because it displays film-making as an art form. Not many movies have the ability to do that.