Directed by Kathryn Bigelow
Written by Mark Boal
Starring Jessica Chastain, Jason Clarke, and Kyle Chandler
“One hell of a hunt”
From what I saw, Hollywood did not produce many detailed movies in 2012. There were several money-making blockbusters and on occasion, heartfelt films, but no interesting ones.
“Zero Dark Thirty” is a solid film that explores one of the most intriguing manhunts in history. Orchestrated by subject matter that many people would dismiss as unfilmable, its a movie that is appreciable in every sense. Its riveting, intelligent, and gripping, but talk about over-hype. It is just not award material.
Opened in limited release last year, “Zero Dark Thirty” explores the decade-long manhunt for al-Qaeda terrorist Osama Bin Laden. Maya, played by Jessica Chastain, is an obsessed CIA operative whose tremendous research leads her through the years in finding Bin Laden.
After critical acclaim and success with 2008’s “The Hurt Locker”, Kathryn Bigelow returns to the director’s chair once again. However, this time it is a difficult subject and very controversial one that is more risky than her previous film. It is rare to see a filmmaker making a movie on terrorists, because these kinds of films hardly get released. Yet Bigelow’s bold attempts have created a fine, rewarding motion picture that works even with some problems on board.
One of the most surprising accomplishments of “Zero Dark Thirty” is it’s mood. Many Hollywood films have the tendency of getting out of hand in terms of tone, but this movie maintains the perfect one throughout. It is dark, raw, and very distinct, and this is mainly due to the direction from Kathryn Bigelow. For this film, the director manages to create a realistic atmosphere.
Though the characters are not fully fleshed out, the screenplay by Mark Boal is incredibly detailed. There is an astounding amount of information in the movie, which comes together perfectly due to immense research. Yet sometimes too much detail can become overbearing and even overwhelming. Maya, the lead character in the film, is the only one who has an interesting character arc. The rest of the cast consists of actors who have seemingly incomplete characters. Yes, anybody can understand that detail matters tremendously for a film like this, but characterization is also needed for a movie to succeed.
One such scene where the detail is unneeded is Zero Dark Thirty’s opening sequence. A blacked out screen is only accompanied by muddled voice-overs. You can somewhat make out what they are saying, but this scene does not add to the movie in any way. What’s even worse is that it goes on for too long. It is a poorly crafted sequence that does not represent impressive film-making. 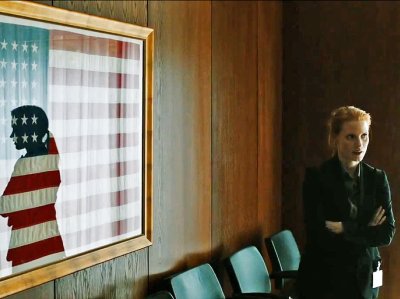 The lead character, Maya, is the heart of the movie thanks to a great performance from Jessica Chastain. In one of her toughest roles to date, Chastain magnificently carries “Zero Dark Thirty”, raising it from an average film to a solid one. Not only is her character well-developed, her acting is fantastic. She comes across as a very talented actress and her performance displays it.
Another notable mention is Jason Clarke. Despite having limited screen time, Clarke establishes intensity into his character and makes himself stand out. The torture scenes in this film are hard to watch, but it is in those scenes that Clarke shines the most.
As a whole, “Zero Dark Thirty” is a solid, but problematic film. I’m not too sure whether the controversy behind it is affecting it, but that is not why it is flawed. The movie’s flaws lie in it’s overlong running time, incomplete screenplay, and slow pacing. I never thought that a film like this would ever be perfect, and it turns out that I was right. The award-recognition this movie has been getting is to me, very mind-boggling and strange. It may just be the fascination of the details and research, but only time will tell whether that is true.
3/5 stars